For the fifth installment of this series, I decided to interview a media member who has extensive knowledge of analytics. Matthew Coller is the Managing Editor of Hockey Prospectus and a producer for The Howard Simon show on WGR 550, a Buffalo-based sports radio station. He uses advanced statistics in his work at Hockey Prospectus as well as when he covers the Buffalo Sabres and the Rochester Americans of the American Hockey League.

We talked about his foray into analytics, the merits of considering advanced stats in player evaluation and what improvements he’d make to the NHL’s new “enhanced stats” section on its website.

When did the concept of advanced stats first catch your eye?

I played baseball in high school and since I was a little kid. I was always interested in baseball statistics. There’s a cliché that “the stats nerds studied the back of baseball cards when they were kids,” but I really did and I really loved baseball stats. When I got older, my parents got Internet at our house. The first thing I did was go to Major League Baseball’s website. I looked up all their stats and looked at all the box scores in the newspaper in the morning. Then Moneyball came out and it just grew from there.

When did you start using advanced stats in your work?

I did an internship in college and part of my job was to do research. I would provide the host with different numbers and statistics to bring up throughout the show. Obviously he could bring up Baseball Reference or whatever page himself so I tried to dig in a little bit more. I would try to find unique statistics and people that were doing unique work. One of the people he would bring on the show was Will Carroll from Baseball Prospectus. So I would read a lot of Baseball Prospectus and bring up some stats while he was on the show. Then I did my own show on an Entercom station in Rochester on Saturdays that was purely based on hockey — mostly the (Buffalo Sabres) and (Rochester Americans). Naturally, I would bring some Hockey Prospectus guests on and I began to learn more about that side of it. From early in my career, I wanted to have that different perspective.

Did analytics ever change your perception of a certain player?

Since they’ve always been a part of how I analyze the game, it might be a little different than for some people. Some people might see a statistic and think “I never would have thought that.” For me, statistics are a part of all the work I do. Patrick Kaleta might be a good example, though. I never really liked Kaleta’s game that much back when the Sabres were good in 2006-07. Someone at Hockey Prospectus pointed out to me that he was the best player in the NHL at drawing penalties. The Sabres had a lot of good players and scored a lot on the power play, so his value existed in sort of a hidden way. 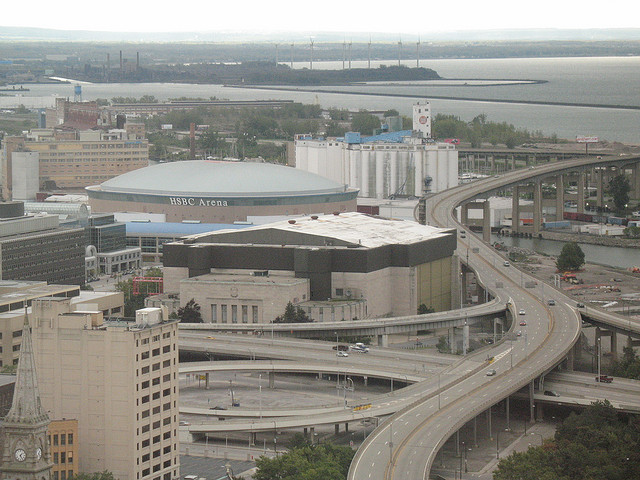 Can you name a player you’ve covered where the stats and fan perception are furthest apart?

Brad Boyes. The second year after the Sabres acquired him, he didn’t score very much and he was ripped up and down by the fans and the media. When I looked into the statistics and how he had previously been used – how many offensive zone faceoffs, how many power plays – it turned out that he was being used differently than he had been in the past when he scored 40 goals, and that was probably the main reason why he couldn’t score in Buffalo. It wasn’t because he was a bum or he had lost the ability to play hockey, it was because they took away his power play time. After he left Buffalo and teams gave him power play time again, his scoring went up again. But at the time he was talked about as one of the biggest bust trades — as (Sabres General Manager) Darcy Regier’s fault, it was Lindy Ruff’s fault. That stands out because the first advanced stats article I wrote for WGR was about Boyes. I had written for Hockey Prospectus before but that was the first time I brought it into the local venue.

How did you convince your bosses at WGR to allow you to publish analytic-heavy articles on the website when it was still a fairly new concept in the hockey community?

The good thing about our website is that when you have something good to put up, you can just put it up. My old boss was pretty much like “hey, if you’ve got something good, go ahead and post it.”

I’ve been lucky in the sense that my station has other people there who are interested in the statistical angle. I’ve never been called a “nerd” by them or been told to “watch the game” by them. That comes from other people in the media.

The advanced stats revolution has definitely changed media conversation surrounding sports, but not necessarily on sports radio stations. What do you think sets WGR apart?

That’s a good point and it’s one of the reasons I never thought I’d end up doing radio. When I listened to sports radio, I thought it was shallow and dull. But not the WGR guys, because they think along the same lines that I do.

Getting it to sound interesting is hard because if you’re talking about math and formulas, it’s received with “this is boring, this is math, I don’t want to take algebra class.” But once you realize that statistics debunk a lot of the myths in sports — and that becomes a part of the fabric of your show and you can pinpoint them and make it interesting — I think your audience accepts it too. Jeremy [White] and Mike [Schopp] stand out because they’ve known this for a long time and that’s part of the reason they are where they are. They can find a bit of information and present it in a way that will catch an audience.

I’ve taken my cues from them. If I turned on my microphone and started explaining offensive vs. defensive zone stats and all those formulas, people would change the station. Sometimes you only need one or two statistics to make a point about a player that maybe people don’t expect.

If someone looking to get into analytics asked you how to best apply advanced metrics to sports, what would you tell them?

Throw out what you’ve heard. In order to get into analytics, you have to be able to not fight what you learn because you’re committed to something your dad or a coach told you. That’s another way of saying you have to be open minded about it. If you start looking at statistics and say “this is crap, I know the game,” it’s going to be difficult for you. If you start to throw out the things you think you know, you can learn at a quicker pace.

Another thing I’d say is to not believe everything you read. I hate to admit it but it’s true that you can prove things with stats by twisting them around. It was done after the Super Bowl when contrarians argued that it was fine that Seattle passed the ball at the end. You have to maintain a level of common sense. You have to remain skeptical — don’t believe every stat that’s thrown out there.

When you come across a player you’re unfamiliar with, what process do you undergo to study that player analytically?

It depends on the position. Depending on whether it’s a forward, defensemen or goalie, I’m going to look at it differently. It also depends what kind of role a guy has. Let’s say there’s a guy who plays in Vancouver and is a fourth liner. He played 50 games and I didn’t see any of them. I would look at how he was used, how much time on ice he was given, how much offensive time was given, how much power play and penalty kill time he was given. Then I’ll know what his coach thought of him. It tells me if his coach thought he was an offensive or defensive player or whether he deserved 20 minutes of ice time or seven minutes of ice time.

From there, I dig into how he did in the context of his usage. How well did his line possess the puck when he was on the ice? How much did he score at even strength? Basically: how did his coach use him and was he successful in that role? Then you look at who he played with and what effect that had on his scoring. That’ll give you a basic profile of the guy. From there you really have to watch the player play to see how much a part of getting that puck possession he is. There are passengers and there are drivers. If anyone played with Patrice Bergeron, they’d have a good Corsi because he’s good.

You have to watch the player play and study the numbers to get a good feel for how good a player is.

On a recent Hockey Prospectus podcast you and some of your guests critiqued the NHL’s new enhanced stats page. What advice would you give to the league to improve it?

Call the guys I was talking to: Rob Vollman, Tom Awad and Timo Seppa. Those three guys are my mentors in analytics. When I started doing work with hockey stats in 2008, those guys were the best of the very few that worked with hockey stats. They’re really pioneers. And all of those guys have created things that you see everywhere now. Those player usage charts on War On Ice, those are Rob Vollman’s. He invented those.

With the ingenuity of guys like them, they were the ones that needed to be consulted. It was really shoddy, to be honest. I expected the NHL, with all the assets and money it has, to reach out to the best engineers and the best analytics people. They did ask Rob Vollman some advice but I was really put off by how poor it looked. There isn’t a single stats person who goes to NHL.com right now to get those numbers. They’ve got to do better than that.

They have to make it more interactive for fans. They have to figure out a way to make your own charts and things like that. It does not look like this major, international computer company invented it. And that’s aside from the bugs in the code. If your code says Nick Deslauriers is the best possession player in the league, I think there’s something wrong with it. The biggest thing they have to do is make it easy for the fans who don’t know about it, make it so they don’t have to work to look at the stuff. It’s so confusing right off the bat; if I didn’t know stats already, I wouldn’t be there for more than 10 seconds.

Just a couple guys made War on Ice, which is a much better site than SAP made, which is a major international company. It was a major disappointment for sure.