Long before hockey teams hired analytics gurus and broadcasts cited Corsi and Fenwick, Rob Vollman studied hockey from a statistical perspective. He was one of the pioneers of using advanced stats to better understand hockey, and he’s playing a major role in bringing that knowledge to the mainstream.

Vollman has released two books in as many years titled “Hockey Abstract.” The books set out to answer fundamental questions of hockey (who is the best player? who’s the best at penalty killing?) and it does so in a way that a casual hockey fan can understand. His work is among the most visible in the advanced hockey stats community and he consistently writes clearly enough for a novice to understand his points.

So, I thought he’d be a perfect candidate for a question and answer exchange. I can’t think of anyone more qualified. 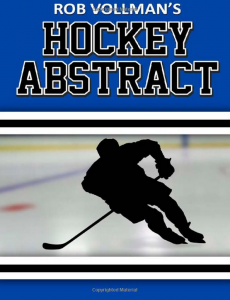 A: As long as I can remember. This is my natural way of enjoying hockey, and practically everything else in my life. On a more professional level, my first publication was in the Hockey Research Journal in 2001, thanks to early pioneer Iain Fyffe.

Q: When did advanced stats first catch your attention?

A: I remember becoming particularly passionate about hockey stats as a young boy around 1985, shortly after save percentage was first recorded, and after I first got my hands on books by baseball’s Bill James.

Q: Obviously stats have gained mass recognition in the hockey community over the past year. Fans are more aware of things like Fenwick, Corsi and PDO. Where do you think the field evolves next and do you think it will end up somewhere the casual fan will be able to follow it?

A: Since those stats were all created — by one man, Vic Ferrari — before 2007, the next big developments are probably already here, from the casual fan’s perspective. From my perspective, the next evolution will come from the technology that was used in the All-Star game to track players and the puck. Everything we believe about players now is implied from data that results from 10 players, two goalies and a lot of random variation. Soon, we’ll be able to study players more directly and see exactly what they’re doing to drive those results.

Q: When you come across a player you are unfamiliar with, what process do you undertake to study him statistically?

A: I start with the basics: his position, his age, his cap hit, his ice time in each manpower situation and his scoring rates. Then, I look him up in a player usage chart, which visualizes in which zone he’s used, against what level of competition, and how well the team does possession-wise when he’s out there. Finally, I look at assorted little things — faceoffs, the shootout, drawn penalties, and so on. The keys are to keep context in mind, and to consider several seasons worth of data, not just what’s happening now.

Q: I understand the NHL consulted you when putting together its new “enhanced stats” page on its website. What did you think of the page when it was unveiled and what additions would you make to it going forward?

A: I think it’s fantastic what they’re doing. It’s great to have an authoritative source for the more trusted statistics, and a platform to share them with mainstream fans. Obviously, some things could have been improved, but nothing ever gets done when you make perfection a requirement. The only truly unfortunate detail was that the speeches made during the unveiling may have left some fans with the impression that there was something new here that wasn’t innovated long ago by Ferrari — or that hasn’t been available on sites like Behind the Net since 2007. There’s a lot of potential for great new additions, [my favorite] of which would be player usage charts. For many fans, they’re a far easier way to digest some of this information than from a table of numbers with unknown acronyms.

Q: You’ve published two books the past two years, which are, to my knowledge, the most comprehensive “how to understand hockey stats” guides out there. What made you want to do this?

A: My inspiration was Bill James and the Baseball Abstract books that he wrote from 1977 through 1988. I’ve desperately wanted a hockey equivalent ever since I first read them, until I finally realized two years ago that I’d just have to write them myself. I really hope that they have opened the door for others to write even better books for me to enjoy in the near future.

Q: As someone who has such an expertise on advanced hockey stats, how do you approach writing to an audience who presumably knows very little about the subject?

A: Translating statistical data into an article that is clear, interesting and relevant is incredibly difficult. It’s important to have no more than a single point, and to make it clearly and up front. In support of that point, I try to express my ideas in as many ways as possible, including examples, tables, charts, quotes from experts and links to other perspectives. It’s also essential to double-check every calculation, because nothing can destroy credibility like a silly error. Finally, I try to add my own personal touch by somehow finding a way to let my own passion for hockey analytics shine through.

Q: What is the most important piece of advice you would give a hockey fan or analyst looking to learn more about advanced stats?

A: Don’t be afraid. Yes, you will get criticized by those who aren’t into stats, and even more harshly by some of those who are, but that’s really nothing to be afraid of. Dive in, share your ideas, make mistakes — it’s all good. The world doesn’t end if you forget to account for score effects, because ultimately it’s all about doing whatever enhances your love of the game.