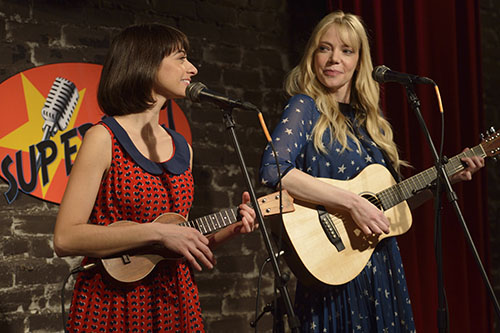 The comedy band, Garfunkel and Oates, go from computer screen to TV screen with the premiere of their self-titled show on IFC. Prior to the official August 7 premiere, the pilot was up and running online (watch it here) which is more than appropriate for this YouTube famous duo. So far, some of their popular YouTube songs like “Go Sports Go” and “The Fade Away” have made it onto the show.

Although Riki Lindhome and Kate Micucci play fictionalized versions of themselves, it’s clear that they’re inspired by their personal lives and other modern topics. They shed some light on real issues that were previously undefinable. (There is, in fact, a polite way to call someone a basic bitch — a “beige curtain” aka someone who’s not good, not bad, just there; it doesn’t get more basic than that.)

The ladies have also done us the courtesy of addressing a rather awkward and unspoken situation. For those of you who are decent human beings, a fade away is basically when you ignore someone out of existence by lying until they get the hint and go away forever. Pulling a fade away and being the faded away from are equally brutal. But this brutal truth bomb was sugarcoated with lighthearted song and dance number.

Aside from entertaining us with socially awkward scenarios, it’s nice to see these ladies use their comedy to shed some light on a few women’s issues. While it’s hilarious to watch them go through relationships without literally speaking a word, it’s strange to think that some women believe they have to conceal parts, especially the ugly parts, in order to make things work.

Lindhome and Micucci also get by with a little help from a few famous friends and fellow comedians. Anthony Jesselnik, Natasha Leggero, Steve Agee, Malcolm Barrett and Sir Ben Kingsley all appear in the first episode. It’s easy to see why they incorporated Hall and Oates into their name — John Oates himself is supposed to make an appearance in episode two next week.

Real talk aside, Garfunkel and Oates is full of quirky nonsensical antics. It doesn’t get much weirder or unrealistic than breaking out into song mid-felatio about said ordeal. There’s also plenty of subtle and unspoken humor. Sure, breaking out into an 80s aerobics music video is strange enough on its own, but it’s especially weird when it happens as the girls fix themselves a meal consisting of graham crackers, frosting, and ice water.

So far Garfunkel and Oates is upbeat and fun-filled. Their songs are original to say the least, but the show has familiar elements that are so been-there, done-that. Viewers are no stranger to a pair of girls just trying to make it in the big city. The concept of a comedy folk band duo isn’t foreign thanks to the short lived Flight of the Conchords. Luckily, this funny folk rock pair seem like they’ve got enough creative juices to find their own identity. As long as those voices remain in sweet harmony packed with punchy lyrics at the tip of their tongues.