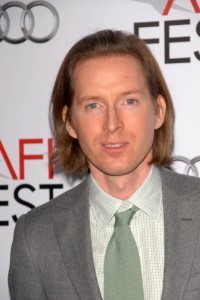 The Grand Budapest Hotel is Wes Anderson’s eighth feature film. It was released to theaters at the end of March of this year, a little over a week after the beginning of spring. Although perhaps a coincidence, the timing of Budapest’s theatrical release accentuates the film’s coming of age theme.

All of Wes’s protagonists struggle with maturity. Consider Anthony’s feigned escape from the psychiatric ward in Bottle Rocket — _where we imagine Holden Caulfield to also reside — in order to please his buddy Dignam. Consider the Tenenbaums’s reconciliation with their father Royal. And the flight of Sam and Suzy into the wilderness of their love in _Moonrise Kingdom.

The process of maturity in The Grand Budapest Hotel takes place within the character of the lobby boy Zero, who later becomes known to us as Mr. Moustafa. Zero’s maturation is not a struggle, but a graceful movement from one state of being to another. This movement is reflected in the painting “Boy with Apple,” which is the catalyst of the film’s plot. According to Ralph Fiennes’s M. Gustave, “Boy with Apple” represents a boy on the brink of manhood — his “creamy white” skin is used deliberately to show the boy’s innocence.

I have often wondered why “innocence” and “the end of innocence” are used conventionally as terms to describe childhood and coming of age. The origin of such terms are perhaps rooted in Christianity, or any number of prominent religions, according to which sex is tabooed to children and young people, and in which the loss of virginity is described as a loss of morality. This Christian conception of having lost something by having sex is consistent with the fall that follows Adam and Eve’s mangia at the tree of knowledge; by gaining knowledge, Adam and Eve must flee God’s presence — they must lose God. The acquisition of pleasure and knowledge necessitates the loss of an abstract, aesthetically sentimental state of being.

“Boy with Apple” invokes the Christian story of Adam and Eve. We can imagine that the boy in the painting is Adam and that he has been handed the apple by Eve. We can understand the apple to be a symbol of a woman. Whatever we might imagine, I am positing that “Boy with Apple” invokes the fall of Adam and Eve in order to establish a connection in the film between religion and personal growth.

(I fear that a lot of what I am saying is becoming convoluted and confusing, or if not, perhaps just plain dull — you will have to tell me if that is indeed the case. But, stay with me, because what I have to say in whatever follows has to do with values and ideals and how we as individuals relate to them.)

So when I write, “‘I am positing that ‘Boy with Apple’ invokes the fall of Adam and Eve in order to establish a connection in the film between religion and personal growth,’” what I am really kind of trying to say is that The Grand Budapest Hotel asks us to consider the relationship of the individual to the values and ideals that humanity has deemed important for us to honor and maintain, through religion or otherwise.

M. Gustave inhabits a time and a place that is reminiscent to Europe before World War II. The time and place is described to us as “this barbaric slaughterhouse that was once known as humanity.” M. Gustave maintains the illusion of being from this time, but, it is said of him that his time had passed long before he lived.

M. Gustave is a champion of the values of western civilization. One of the values of a civilized man is his adherence to the codes of hospitality. If you want a reference to these codes of hospitality, they are given to us in Homer’s The Odyssey. The Odyssey is a founding text of Western literature, and The Grand Budapest Hotel alludes to and is a tribute to it. M. Gustave inhabits a time and place that is very similar to the time and place that Odysseus inhabits in The Odyssey. Both men are surrounded by social decay, yet they remain champions of social values and ideals — one important value being hospitality. In the same way that Odysseus disguises himself as a beggar when he returns to his home filled by suitors who have abused his hospitality, so to is M. Gustave disguised as a servant, although he is the social ideal of a king. “There are still faint glimmers of civilization in this barbaric slaughterhouse that is known as humanity. He was one of them,” Zero says referencing his mentor, M. Gustave. “What more is there to say?”

So often we are discouraged from looking for “messages” in a literary work. Literature is not, after all, a means of communication. But is this really the case? What role did Homer’s epics serve for society when they were recited before they were read?I said before that The Grand Budapest Hotel asks us to consider the relationship of the individual to values and ideals. It seems to me that there is a message included in this requiem for consideration. That message seems to be that individuals have a responsibility to values and ideals. Perhaps they are not abstract childish things that we abandon as we grow. Instead, maybe they grow stronger as we age and as we learn to worship them through our practice of them and our commitment to them. Is there a contradiction between the idea that we can harvest these disembodied ideals as we grow, that we can come of age through them, and the perhaps Christian conception of coming of age as a loss of innocence, as a fall from the ideal?

M. Gustave is a king with a career in the service industry. Besides being a wonderful hyperbole for hospitality, what is the significance of his profession? Next time you purchase something ask yourself if you see God in your cashier’s eyes.