It’s that time of the year again. The time where Disney lets loose the latest version of their never ending supply of teen/tween movie for the new school year, preparing the youth not just for a year of deception with its unrealistic school themes, but also creating an illusion in the minds of females of what ‘love’ really is. And they didn’t fail to do it this time in the movie How to Build a Better Boy directed by Paul Hoen.

The story is about two genius high school girls named May (portrayed by Kellie Berglund) and Gabby (portrayed by China Anne McClain). May is teased by a popular girl and responds by inventing an imaginary boyfriend. Gabby then convinces May to make a sort of cyber boyfriend. Gabby hacks into May’s father’s computer in order to use his gaming software. They later find out that he is not a game software designer and Gabby actually hacked into the United States department of defense, and made a real robot boyfriend for May. 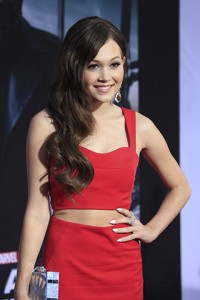 Kelli Berglund plays May, an intelligent girl with low self-esteem who craves popularity.[/caption]

When hacking into the department of defense, Gabby asks May to input what she would prefer her boyfriend to be like. May starts off in an incredibly long list of impossible characteristics. After thinking twice on brown hair, she decides to make this ‘perfect boyfriend’ with blonde hair and blue eyes (insert eye roll), tall, sensitive, super polite, almost Canadian (Justin Bieber?), brave, wise beyond his years (Okay, not Justin Bieber), always says the right thing, “one look and he knows how I feel”… the list goes on.

This perfect boyfriend named Albert (portrayed by Marshall Williams) comes to school the next day (plot hole) to enroll himself (how does he do it?). May falls in love with him instantly, choosing not to question how he could ever come into existence. No one but Gabby and May’s brother question it.

From the teasing of the control freak cheerleader to the romance, How to Build a Better Boy follows an exhausted formula. Ashley Argota plays Neveah Barnes, the angry cheerleader with no backstory or real reason as to why she hates May so much.

The government proves at first to be a better antagonist to May’s love for the robot but then, encouraged by May’s father, James Hartley (portrayed by Roger Bart), government officials come together to help create May’s “Perfect night” in “operation Pucker up.”

May’s best friend, Gabby Harrison, is depicted as a strong, mature character who thinks for herself. She wants to study hard and work harder in order to achieve something, and she is constantly telling May that the strongest women in history didn’t need anyone else. Sadly, as the ending of the movie nears, her fortitude tumbles and her strength quickly slips away as she is dumbed down — suddenly she has a boyfriend of her own — suggesting that a date to the homecoming dance is more important than career aspirations. 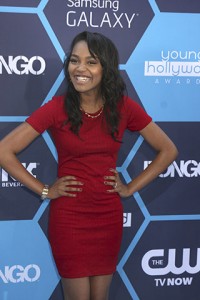 China Anne McClain is Gabby, the confident best-friend to May and the brains of the operation.[/caption]

May is a complete contrast to Gabby, depicted as a weak-willed girl with a low self-esteem who wants to be popular. Throughout the movie, May shows no signs of growth. At one point she exclaims that Albert “is the best thing that has ever happened to me!”

The fashion choices in the film were a definite positive. Instead of Gabby and May dressing in a historically nerdy outfit, they are dressed as more of a Teen Vogue version. (Hey, you can be chic and intelligent! Who knew?!!)

This film is chock-full of undeveloped characters, a storyline that’s hard to follow at times, forgotten enemies with exaggerated ethnic voices and creepy inappropriate scenes for children. From the disturbing sexual angles of military women and students making strange noises, to the creepy father looking on in admiration as his daughter goes on to have her first kiss with a robot, this movie is disturbing.

The apparent message of this movie is that love and teen romance are more important than your career or your intellect, and that once a girl lands a boyfriend — an achievement — they should forget all about their own aspirations.