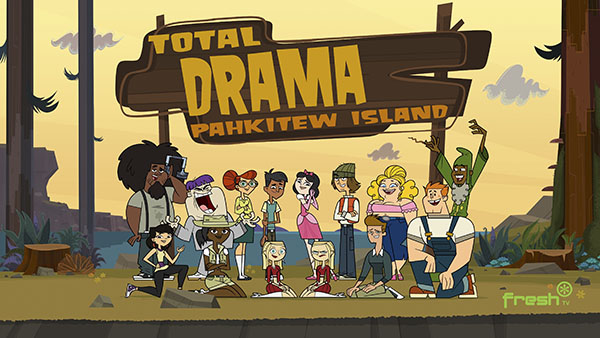 In the summer of 2011, I turned my chair around. My sister was re-watching Total Drama Action. Instead of ignoring her taste of television shows — her version of Disney Channel is just not the same — per usual, I was caught by the show’s usage of the words “film” and “genre” in the same sentence. (And, if we’re being completely honest, I was also caught by the cartoon version of Taylor Lautner.)

I can’t say for sure what drew me to the show, although my sister says I am in denial of “how fun it is to bond over TV shows” with her, but I suspect it is due to the over-the-top teenage archetypes, stereotypes of pop culture and the witty theme song.

If you don’t know anything about the Total Drama Series, here’s the deal: It is actually a Canadian animated series that debuted on the Canadian Teletoon channel in 2007 (produced by Fresh TV Inc) and in 2008 on Cartoon Network. It follows a reality television series formula, with a teenage yet diverse set of contestants fighting their way through challenges to win a large sum of money. There have been five seasons: Total Drama Island, Total Drama Action, Total Drama World Tour, Total Drama Revenge of the Island and the latest season which was divided into two installments — Total Drama All-Stars and Total Drama: Pahkitew Island.

Who doesn’t want to be rich? And who doesn’t want to be famous? Those two questions hang over the show as contestants battle mutated animals, perceptions of each other based on prejudice, and an increasingly violent TV culture. Turn on any episode of the prime shows on Disney Channel, Cartoon Network or Nickelodeon. The characters are constantly screaming and being physical with each other.

What seemingly started out as a parody of Survivor and Fear Factor has expanded to a parody of, well, everything mainstream. Nothing is safe. Pahkitew Island provided a dosage of overused cartoon archetypes. There is a Dexter look-a-like (Dexter, the “evil” scientist, and not the loveable serial killer), as well as modern debates in the form of Honey Boo Boo parodies, internship culture and a _Hunger Games-_type artificial island.

The final episode of Pahkitew Island, “Lies, Cries and One Big Prize,”starts as the final contestants Sky and Shawn are awoken by a bullhorn to start their last challenge. We find Sky sporting bloodshot eyes and desperation in the house that they were forced to build as shelter in the first episode. Shawn falls from a tree after sleeping upside down in order to protect himself from his imagination nighttime zombie attack.  The host, Chris McLean (voiced by Christian Potenza and one of two characters that appear in every season), proceeds to tell them that he cannot wait to blast one of them from a canon (the elimination style of the season) and start his vacation. The entire show functions as a vacation for this sadist; it’s perfect for the ironic tone of the show.

The threat of death is immediately introduced in every episode. Death is the biggest shadow and underlying theme of Total Drama. It is unclear on whether the audience is supposed to enjoy the looming, always-gruesome death of the characters, but at some point the death jokes go beyond humor and act as a mirror reflecting the violence in pop culture.

Just on the surface level, the backstabbing, romance and toilet confessionals of these archetypal characters allow Total Drama to double as any typical competition/Reality television show.

Jasmine is an Australian tough girl with no filter.  Analytical is her middle name. That is until she falls for Shawn, the paranoid zombie conspiracy theorist. To say they make a strange couple is an understatement but Jasmine stands out in more ways than one. With her Steve Erwin outfit, tall height and knowledge of the outdoors, she is an Australian stereotype. Except for her skin color. She is not the usual tan blonde associated with the continent. She is black, possibly aboriginal. And it is that subtle change that makes Total Drama an innovative show resembling the courage of The Boondocks.

Sugar is an overweight, crop-top wearing pageant queen who wants to put make-up on animals. She survives on the show because she is deceitful, and eats everything. In one of the final episodes, Sugar performs a borderline offensive mix of rap and country music that she calls Craptry. Completed by a constant farting, Sugar is Honey Boo Boo. She’s also one of the best animated characters ever produced.

With Sugar, Pahkitew Island has moved beyond a safe reference and moved to satire by subtly exploiting the real life personality of Honey Boo Boo and her family. TLC first exploited Alana Thompson in Toddlers and Tiaras, and it followed with Here Comes Honey Boo Boo, leading to Grantland comically declaring TLC as the No. 1 human shaming channel on television. Sugar and Honey Boo Boo are both trying to balance harmlessness and the dangerous privilege of mixing redneck and black stereotypes. Very few challenge what is Honey Boo Boo because throwing around “lack of education” and “ignorance” can easily dismiss her and her family. In _Total Drama, _Sugar gets away with everything.

From Leonard, the wanna-be wizard (or Harry Potter fans that refuse to let go) to Scarlett, the evil mastermind, these characters represent all that is good with the Total Drama series. It harmoniously and sometimes violently blends the old, new and ugly of pop culture. Total Drama is not a kid’s show. It attracts the youth because of the competitive plot but it requires some thinking about the characters it presents. Let’s not forget to mention that all the seasons of Total Drama have been knee-slapper, choke on your food funny.