The conversation between us the other night jumped from topic to topic in a disjunctive way, as is so often the case with casual conversation. But this disjunction was perhaps exacerbated by Mike, our waiter, who, by way of introduction, scribbled his name for us in blue crayon on our tablecloth, which was definitely the only thing he managed to do for us both promptly and without first forgetting. (Although I thought I saw him hesitate before completing the 45 degree angle in the third letter of his name. My father says this is not true, and that I should take it easy.)

Eventually our conversation fell on Liam Neeson, for a brief time. 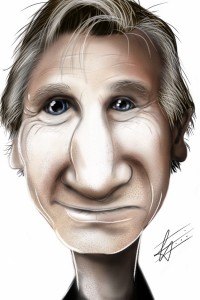 Neeson, one of the most celebrated dramatic actors of the 20th century, has allowed himself to become a caricature. But why?
(Sketch by Cesar Mascarenhas)[/caption]

Over the past six years we have watched Liam Neeson recycle the same generic plot into four separate Hollywood blockbusters, an achievement rivaling Charles Bronson’s “Death Wish” series. Neeson’s “creative efficiency” started in 2008 with the first Taken. Sprinkled between the “Big Four” — Taken, Taken 2, Non-Stop, and _A Walk Among the Tombstones — _in more of a downpour than a sprinkle, have been 33 films that Liam Neeson has had a part in. This is sort of unprecedented. The other night at dinner my mother, relaying what she had heard in an interview with Neeson, said that he is involved in so many movies because he is trying to stay busy since the sudden death of his wife, the actress Natasha Richardson who passed away on March 18, 2009.

Of the 33 movies that Liam Neeson has been in since 2008, the Big Four have come to represent Liam Neeson, specifically, as an actor at the present moment in Hollywood. The question that comes to mind whenever I see a trailer for one of these movies: How long is the American public going to tolerate another movie in which Neeson loses someone dear to him and “goes to war” in order to bring them (her) back? The answer, I think, in the vain of Carl Rogers’s “unconditional positive regard” is: however long it takes.

Neeson, like Bruce Willis and many other male movie stars before him, has become connected to a very particular vision of masculinity, the subject of a fantastic satire on Key & Peele:

The highest aspiration of a great actor is to disappear behind his/her character, to bring the character that the actor is portraying to presence, while the actor pairs his/her nails nowhere in the background.  Heath Ledger’s portrayal of The Joker in The Dark Knight is a great hyperbolic example of the actor’s telos because, in the audience, we can watch The Dark Knight and literally find no trace of Heath Ledger there — his face is covered entirely by fiendish warpaint, and by the time any of us watched The Dark Knight on the high screen, Heath had already committed the magician’s finest disappearance act.

Heath disappeared in January and returned to us in July. Neeson, however, has reversed this aspiration. Instead of disappearing behind the characters he plays, Neeson, the actor, emerges through them. In this way, we quite possibly don’t actually see him as an actor, but as a person struggling with us through his own grief.

The audience becomes positioned in the role of the therapist, and Neeson becomes positioned in the role of the patient, acting through hostile scenarios that are intended to seem real. At some point in our experience of watching these movies we abandon our role as therapist. We very often find ourselves rooting for Neeson, even accepting his anger as our own, and perhaps fueling our experience of his with ours so that the distinction between the anger becomes blurred.

And many of us talk about him at dinner. We empathize.