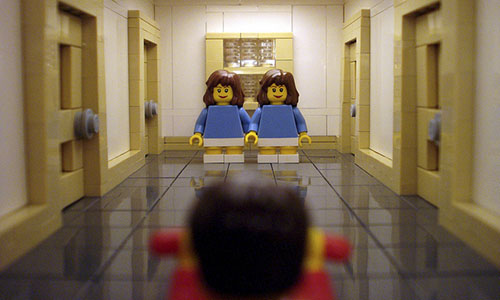 If there’s one horror movie I’ve been dodging my whole life, it’s The Shining. I’m only familiar with it through pop culture references (ESPECIALLY around this time) and the crazy theories behind it. Whenever I hear Stephen King associated with anything, I just automatically assume I’ll be scared to death. Much to everyone’s surprise, I’ve seen Carrie more than once and truly enjoyed it. And no, I think I can go on a little longer without watching It. I’ve been getting my creepy clown fix through American Horror Story: Freakshow.

This is also my first Stanley Kubrick movie, ever. I can already hear gasps from hardcore Kubrick fans and movie buffs alike. This is what it’s come down to, getting over a silly fear of horror movies in order to discover incredible films by iconic filmmakers.

Since the whole world has probably seen this, I’ll spare you the details of what goes on. Overall, I was really impressed with how visually stunning the whole film was. I was torn between looking away out of fear and gawking over how great the scene looked. It wasn’t pretty for the sake of being pretty, so much detail went through everything. If anything, the soundtrack accompanied with flashing images really got to me. As much as those high pitched noises freaked me out, it was a nice touch.

Everyone in the cast was phenomenal. I can’t think of anyone better than Jack Nicholson to perfectly depict Jack Torrence’s downward spiral into insanity. I read somewhere that Kubrick really pushed Shelley Duvall to her limit — and it paid off. Wendy was absolutely convincing, her terror genuine. Going through those levels of emotion is rough on anyone.

However, the kids in The Shining really brought that creepy factor. Before watching this, I always assumed the film focused on Jack’s descent into craziness. Never trust kids with imaginary friends, especially kids with a knack for psychic abilities.

Overall, I think I handled watching The Shining by myself alright. Only wanted to kick my computer off the bed once or twice. I have mixed feelings about the ending, but I’m glad it wasn’t a complete blood bath. It was definitely a “sleep with the night light on and question all of the noises” kind of night. I couldn’t help but feel eerie vibes once I survived sitting through it, which carried on into the morning.

After watching just a few movies, I don’t think I’m going to turn into a full fledged horror fanatic. I now realize that this genre has a lot more to offer than scaring the crap out of viewers. It’s just different way of storytelling, which I can gladly get behind. I’d like to think that people watch horror movies for the opposite reason that people watch romantic comedies with happy endings. These terrifying scenarios remind us that we don’t have it as bad.

Although someone else has got it worse, it’s a relief to see them triumph over something that seems near impossible. With every genre, there’s certainly a wide spectrum but fear is an inevitable emotion that we can’t escape. Therefore, it has every right to be depicted in film. It also shows people being pushed to their limits, mentally and physically. I think watching a horror movie is a journey within itself. There’s this air of coolness to people who aren’t phased by scary movies. “Oh, yeah, I’ve seen that. It was pretty cool I wasn’t too scared.”

Much to my surprise, I want to look more into the behind the scenes and some of the myths associated with the film. I can finally dive into more of Kubrick’s movies, and maybe I’ll even add a few Stephen King books to my seemingly endless list of books to read. Maybe this what happens when you step out of your comfort zone, you discover things you thought you’d never enjoy. 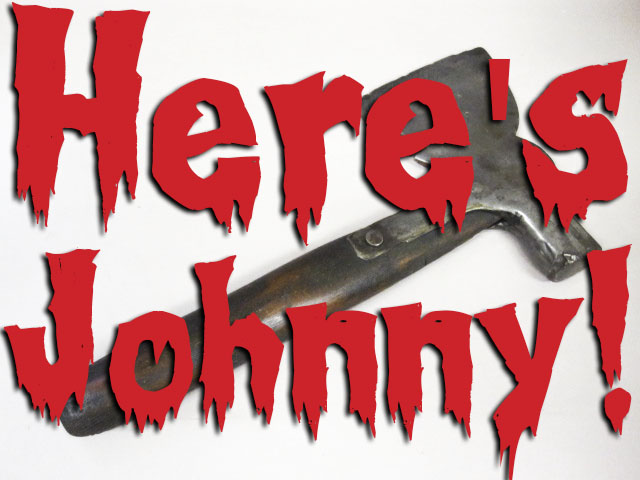 Here’s are some specific thoughts on a few of The Shining’s most terrifying and iconic scenes:

“All Work and No Play” - I’ve heard this quote a million times, but putting it into this insane context finally makes sense. I feel you Jack, writing is a struggle but I think you’ve got more to say than that one line. It’s also no reason to snap on your wife. Also props to Wendy for reminding me that a baseball bat’s a legit weapon. Maybe The Shining is a cautionary tale on how you shouldn’t mess with struggling writers.

“Blood literally everywhere” - This movie was made in 1980 so the thought of gallons of blood flooding any place is scary to think about. I had to remind myself that these weren’t special effects, it was someone’s job to make gallons of fake blood and pour it out of an elevator shaft. Perhaps that’s the cool thing about older movies, the creative improvisation that goes behind special effects. That being said, I was mostly concerned with how awful that must’ve been to clean up.

“Here’s Johnny!” - Again, in context, this is way creepier than I imagined. But still a little hilarious despite the fact murder’s on the agenda. Like who else could it be? Witnessing Jack and Wendy feed off each other’s energy was pure cinema.

“The twins” - These two were barely in the movie and managed to make me reaffirm my belief that children make everything creepier. Maybe kids are so creepy in horror films because they’re symbolic associated with innocence. If something so harmless could be corrupt by an awful entity, then the rest of us grown-ups are completely screwed.

“Room 237” - This was the scene where I almost kicked my computer off the bed. Instead, I got my shit together and paused it while I went to prepare myself by stuffing my face with candy. I hit play and my first thought was “wow this bathroom is really pretty” and then immediately to lots of internal screaming because I was not expecting a naked rotting ghost lady to make out with Jack. I actually googled this scene for reference and now I’m scared thinking about it.

The Halloweenie watches Silence of the Lambs