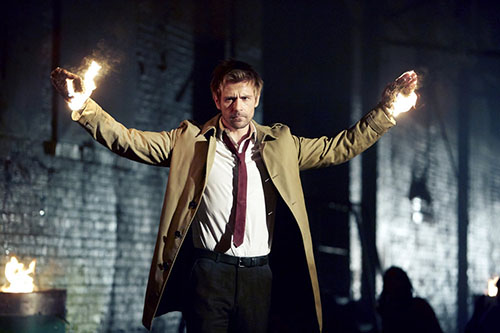 Everyone loves a British accent. This wasn’t the entire basis for bringing back the popular anti-hero John Constantine but it’s more than a choice of vernacular either: it’s a subtle commitment to the DC universe’s version of Constantine. Now two episodes deep, Constantine has been given room to breath and a chance to lay down the foundation for a hopeful run.

For those who don’t know, John Constantine the character is incredibly interesting. He isn’t the low talking action monger than Keanu Reeves depicted — he’s actually kind of funny. Wales born Matt Ryan (Assassin’s Creed IV Black Flag) brings Constantine a much-needed sense of depth and even though Constantine remains one of the darker DC Comics productions to date, Ryan manages to actually capture the cynicism and wit that John Constantine is known for.

The series opens its first scene with our main character on a self imposed stint in a mental institution, his first words being “Make sure they’re tight, love.” The moment encapsulates one of Constantine’s biggest flaws as a show, its tone. This problem stems from the subpar dialogue, which is to be expected from a primetime NBC program. But more surprisingly, Matt Ryan’s ability to bring charisma and energy to Constantine is eclipsed by the fact that he shines in the shows character driven scenes.

Seemingly standing head and shoulders above the rest of the cast, Ryan actually brings Constantine beyond an angst filled dabbler of the dark arts; he’s damaged and it’s apparent. While this is evident in the first episode, episode two “The Darkness Beneath” offers a stronger sense of balance between talented detective and emotionally scarred detective. Set in a Pennsylvania mining town, the episode opens with a gratuitous murder that keeps up the supernatural shock factor the pilot established without any of the hyperbole. Even though it’s early it’s good to note that Constantine is going for an interesting format. Constantine combines the “show the crime—find the crime—find the killer” format that is utilized in programs like Supernatural or Criminal Minds, with hints of Colombo, the age old detective show that changed the genre.

To the credit of Daniel Cerone who wrote the script, Constantine builds a fascinating back story and throws viewers right in the middle of it all. One of the strongest plot points is Astra Logue. Astra is a young girl who Constantine attempted to save by using another demon to handle his business — it didn’t go well. The aforementioned demon, Nergal, not only does fails to do Constantine’s bidding but drags Astra to hell. It’s these details that not only paint the context of Constantine’s character but gives the season hope for some interesting arcs.

Thankfully, Constantine looks pretty cool and this combined with decent story arcs is admittedly fun. From moments like the creation of a crater into hell and exorcism-like-body bending, Constantine puts a staunch amount of effort into its presentation. Director Neil Marshall, known for his work on Game of Thrones, is the main culprit for the creative take on the dark arts. These moments make up for the weakest part of the show and that’s who Constantine comes back for, Liv. Liv is the stereotypical dead friend’s daughter who acts as the driving force for the plot and as quick as she comes she goes. Lucy Griffiths, who was cast as Liv, was written out of the show as regular filming began. 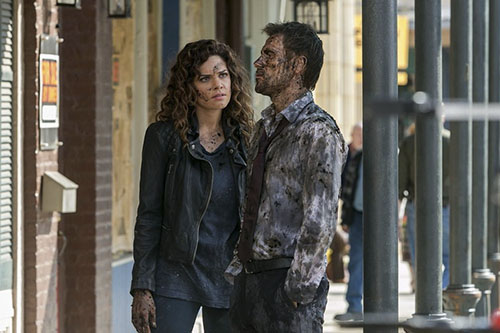 Liv’s replacement, Zed Martin (Angélica Celaya) was the shows latest challenge. At the end of the pilot episode, we were shown a frantic artist, Zed Martin, surrounded by drawings of our hero John Constantine. Rockne S. O’Bannon, writer for episode two, was given the task of working Zed in with the show. As oppose to casting a character similar to Liv, show-runners Cerone and Goyer decided to go in a different direction. Zed is the polar opposite of Liv, and in all the good ways. She’s persistent as compared to Liv’s passive; curious in contrast to Liv’s disbelief.

Zed brings more than her presence, her role as sort of a psychic or medium expands on the different ways Constantine gets to his ends. While Liv’s powers needed Constantine as a catalyst, it appears Zed’s powers are only amplified by Constantine’s presence. And a cherry on top to the Zed scenario is that we don’t know everything about her, she doesn’t have the moral standing of a noble father to dictate her development. Zed is the perfect character to pair with Constantine, the push and pull of their characters will provide for some quality character development moments.

Though it was a pilot, “Non Est Asylum” only scratched the surface on what is a wealth of character development. “The Darkness Beneath” didn’t do much that the pilot didn’t; besides introducing Zed we’re given a solvable mystery and just another step on a long path. While it was clear that the creators, Daniel Cerone and David S. Goyer, wanted to approach Constantine’s pilot episode with a bit of lighthearted humor it wasn’t exactly cynical. With that said, this pilot isn’t without any hope, the depth of the storyline and Matt Ryan’s performance will carry this show or be diamonds in the rough of another one season and done show.