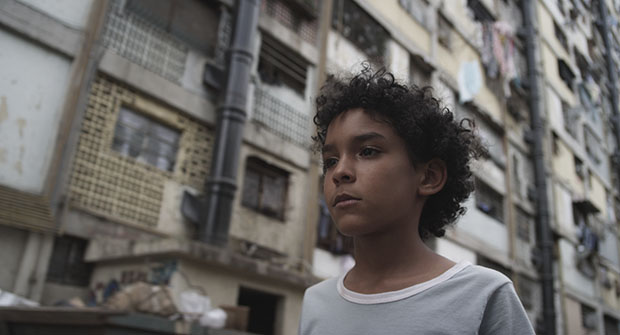 There are cinematic tragedies, like a sudden death or extended fight scenes that leave a visible scar, and then there are the tragedies likes the ones explored in the Venezuelan film Pelo Malo, tragedies of the spirit.

It is easy to cause physical damage but destroying the light and soul of a person takes effort.

In Pelo Malo, director Mariana Rondon set out to explore the relationship between youth and the lasting effects suffering at a young age can have well into adulthood. “That age is the moment where wounds that will become irreversible for the rest of life appear, it is there that someone can be hurt and never heal,” explained Rondon at the Film Forum in New York City this past weekend.

Junior (Samuel Lange) is nine years old and his biggest dream is to take his school picture dressed as a singer with straight hair. It doesn’t matter that he can’t sing and dance, lo importante es el pelo liso (_what is important is the straight hair). _Pelo Malo (or Bad Hair) follows Junior’s growing obsession with straightening his hair. Simultaneously, his widowed mother, Marta (Samantha Castillo) grows homophobic, convinced that Junior is gay.

The film brutally explores a toxic mother-son relationship; Castillo’s portrayal of Marta is hard to stomach. Marta’s irrational disgust for everything her son does is heartbreaking and his relentless desire to have the perfect picture is ultimately not stronger than his need for his mother’s love and acceptance. Junior finds acceptance in his grandmother, Carmen (Nelly Ramos) who has a blow dryer and teaches him how to dance to the beat of Mi Limon, Mi Limonero by Henry Stephen. But Carmen has ulterior motives; she wants to raise Junior so that he can take care of her in the future. Marta refuses to sell Junior to Carmen and in a desperate attempt to change her son’s sexuality problem (something that the film never confirms) Pelo Malo produces one of the most traumatic scenes in recent cinema.

“She is a very strong character that I feel is living a very limited situation,” Rondon said explaining that she often defends Marta as a character. “She is doing the best that she can for that son but I don’t believe that she has the tools, I don’t think she has the means, does not have the capacity to respect and understand him.”

The loss of respect in their household is evident as tension builds — tension that was created intentionally by Rondon and producer Marité Ugás to create the feeling that something tragic was about to occur. Toward the end of the film, it is clear that Junior not only doesn’t respect his mother but he has completely lost his innocence. The tragedy lies in the silent destruction of Junior’s simple request.

Pelo Malo submerges the viewer into the environment of the poor working class in the city of Caracas, where children create little stick figures out of matches, and families are packed in the remains of multi-family high rise buildings inspired by le Corbusier’s utopian city. It is a ruthless environment that thrives on cultural roles. Junior’s best friend, la niña (the girl) is a reflection of her environment and a culture fixated on beauty pageants — with seven Miss Universe crowns, Venezuela is known for its rigorous beauty pageant training — and political messages.

Junior, although extremely mature for his age, is just a kid faced with negative images. Early on in the film, when he accompanies the girl to look at photo options, the photographer takes one look at his dark complexion and curly mane and points to a photo of a child black soldier. It does not go unnoticed that above that image is another photo of young white boy, with straight hair in a serene waterfall background.

Junior’s desire to have straight hair is similar to the struggle present in Latin American society. “Pelo malo” is a term all too common used to describe curly or kinky hair. The clear sign of the dark history of colonialism and creation of a fake white identity in countries that often refuse to accept their black mixed heritage. Junior does not have any positive images that look like him and with his friend, the girl (ridiculed for being too fat to enter beauty pageants), they are striving to be accepted — at a minimum noticed.

Rondon described a time where she screened the film in a room full of African-Americans with pelo malo and when she came out, her straight hair was a disappointment. 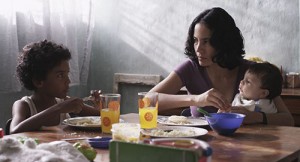 “My mother has the most beautiful bad hair that I know and that all my life I envied,” said Rondon, who also wrote and is a founder of Sudaca Films, the independent film company that produced the movie. “I think what happens is that we grow up wanting something that we can’t have and not recognizing ourselves, liking ourselves and that journey we have with the mirror of discovery.”

Upon meeting Rondon, it is surprising the way that she jokes and makes light of the darkness of her themes. One can easily expect a serious, rough woman but it is that subtle gentleness that comes across in Pelo Malo. There is a warm sharpness in the honesty of the child actors and their quick, short lines (You smell bad; I don’t love you) left many in the audience gasping. But it is in the look and stares that the acting excelled. Marta’s loathing of her son was more physically evident than anything else and not in an exaggerated theatrical manner but that of unconscious surrender to distaste.

Rondon explained that the story of the film came to her out of the anguish she feels for the political and social situation in Venezuela where she believes the violence of the streets was making its way into the family values and intimacy.

“I went out into the streets to collect gestures and glances of violence,” Rondon said. “I did not want a weapon, a strike… I wanted the gestures and stares of violence that are capable of hurting sometimes even more.”

These gestures not only came across in the film but added depth to the social significance of the film. In the scenes where Junior is staring at Marta with a mix of wonder and curiosity, only to harshly get brushed off, he’s desperate to find a way in. Marta’s hair is significantly straighter than Junior. His hair is his hope for fitting in a world that doesn’t want him and it is those gestures that transcend Venezuelan culture.

Rondon admitted that she set out to make a film about Venezuela and for Venezuela. During the time she has spent screening and traveling the world — Pelo Malo has received over 13 international awards — the conflicts in the film are proving to be universal.