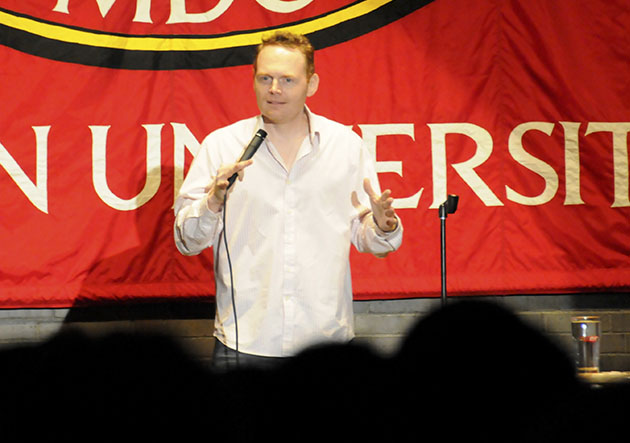 I should start here: Bill Burr has been very funny for a deceptively long time (he’s been in the national spotlight for about a dozen years now). Long enough that his presence on stage predates cell phone cameras, internet activists, widely-read blogs, “outrage culture” and the subsequent effect of all that on live comedy acts.

Burr has had to adjust not only to the Netflix/YouTube/video-pirating culture, but to a culture that crucifies comedians for stepping a millimeter over the line of what is considered offensive. This was a major theme in Burr’s new special I’m Sorry You Feel That Way, which premiered on Netflix recently.

From joking about domestic violence to eviscerating the entire city of Philadelphia, Burr has never shied away from saying whatever he damn well pleases. He spends much of the early part of the special making fun of the internet’s propensity to take offense to just about everything.

It’s difficult to decide whether Burr makes a legitimate point or not. Sure, you can find a blog/tweet/post spewing anger about some remark perceived to be offensive or ignorant every day all over the internet. But that’s only because there are people saying things that are offensive and ignorant every day. More importantly, those comments are often made by people in power.

And there are legitimate reasons for outrage. It’s still not legal for gay Americans to get married in more than a dozen states; rape culture is still a real, prevalent and disgusting issue; the Michael Brown and Eric Garner incidents have revealed how much racial tension and inequality still exists in America. Plus, domestic violence. War. Abortion. Trans-gender inequality.

I could go on, but the point can be readily seen: there’s plenty to be outraged about. Someone like Burr – a wealthy, white, straight, male who admits to growing up in an intolerant environment – might not see it that way.

But does that matter? This is just a comedy half-hour, after all. The point is to make people laugh, right? He’s not writing for The Guardian or The Atlantic, he tells jokes for a living.

Yes, it matters. At its best, stand up comedy is humorously-delivered social commentary. It should make you think while it makes you laugh. That, among a bevy of other reasons, is why George Carlin is the undisputed king of stand up. What you’re saying shouldn’t just be funny, it should have a sliver of truth to it.

And that’s where Burr’s special comes in, because there is a sliver of truth to his point. I wouldn’t resort to using the term “outrage mob” but oftentimes Internet anger is misplaced. It’s gotten to the point where people are publicly shamed for stating an opinion contrary to the beliefs of those fighting for a social cause, even if it’s just a joke. In fact, especially if it’s a joke. We’re in the midst of a three-year Twitter debate on whether or not rape jokes are okay under some circumstances.

Of course they are. And so are domestic violence jokes. Jokes about war, sex and death too. Provided those jokes are coming from the right place, and that’s the important part. Because the previous few sentences could be misconstrued as me saying it’s OK to make fun of important social causes. That’s because this internet culture mistakes comedy for humorously dismissing whatever the subject of the joke is. But that’s just not the case.

If you’re a racist joking about race, you will probably come off as more hateful than funny. If you’re not OK with same-sex marriage then you’re probably not capable of writing quality jokes about the gay lifestyle. There’s a difference between comedy and bigotry and there’s a difference between humor and mockery. All of this relies on a veteran comedian who understands the delicacy of what he or she is doing.

Burr understands himself and his act. He’s not a racist, he has no problem with the LGBTQIA+ crowd, he’s not a sexist. And he’s really, really funny. This special is as good as any of the other hours Burr has done in his impressive career.

Most fans of stand will find I’m Sorry You Feel That Way hilarious. Some may not. Some may be offended, and some may not “get it.”

And if you’re one of those people, I’m sorry you feel that way.