Now that this holiday movie challenge is coming to an end, I think it’s safe to say we’ve gotten to know each other. I’ve experienced Christmas on the United States’ terms and it was time to expand to other vantage points of this particularly joyous holiday.

Joyeux Noel is a French film released in 2005 that follows a somewhat fictionalized version of the famous truce in World War I that occurred in December of 1914. As an ensemble film, it’s bound to remind many of movies like Love Actually, Crash and even He’s Just Not That into You. The film follows the stories of six different characters: three lieutenants, one French, one German and a Scottish; a Scottish priest; and two opera singers — one being an enlisted German tenor and the other, his wife, a famous soprano. 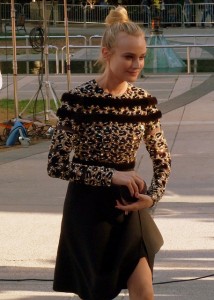 Diane Kruger at the premiere of Inescapable, Toronto Film Festival 2012. Kruger starred in Joyeux Noel in 2005. (Photo credit to GabboT)[/caption]

Joyeux Noel is directed by Christian Carion who surprisingly has only directed three other films and only one (Farewell) since Joyeux Noel. _Aside from the heavyweight German pair of Diane Kruger (_The Bridge) who plays the Danish soprano and Daniel Brühl (Rush) who plays the German Lietenant Horstmayer, American audiences won’t have too many “Oh that guy!” moments throughout this film. But the french lieutenant, Audebert, is played by Kruger’s ex-husband french writer/director/actor Guillaume Canet. One of the strengths of this movie is the harmonious nature of the story, full of genuine performances. Dany Boon and Alex Ferns are memorable for their brief moments of comic relief and intensity, respectively.

This movie takes a period that the world will never forget and shows us that even within the most heinous and deplorable conditions there still is great capacity for Christmas cheer. Watching this movie reminded me about the traditions associated with Christmas, and I found myself pondering over what did I thought was going to be different in other cultures? Modern Christmas comes from a very secular sentiment and some of the most famous traditions come from the most religious parts of the holiday. For example, there’s a part in the movie which really sets off the truce where the Scottish soldiers start to play silent night on the bag-pipes and Sprink, the German tenor, arrives with his wife from an all officer party to bring Christmas to his fellow soldiers on the front line.

While this shouldn’t have surprised me, I think I’ve actually let the mass production of American Christmas classics convince me that we’ve been producing the bulk of the Christmas cheer, ridiculous n’est pas? There’s Boxing Day (Dec. 26) which is celebrated by countries around the world; Second Christmas Day is celebrated in Germany, Scandinavia, Poland and Belgium; and there other secular holidays celebrated internationally — Hanukkah, celebrated by Jewish people world-wide, and even Pancha Ganapati, a five day Hindu festival.

What I’m getting at is, the holidays don’t belong to anyone nor are they exclusive to a particular group. The spirit of these holidays are for us — the people of the world.

One of the more daunting events in this movie is after the cease-fire is over, it’s supposed to go right back to war as planned. It’s a cruel fate that these soldiers had to experience this and go right back into war time; and if you aren’t a history buff, you might not know that World War I ended roughly in 1918 — four years after the events this film is loosely based on. Many of the men involved in the truce never saw the official end of the war.

It is almost common for the spirit and cheer to die down when the holiday has ended.  What I’m taking from Joyeux Noel is that humans are capable of extraordinary things, and we shouldn’t begrudge what we’re capable off if it only happens because of the holidays. Let’s try and embrace it.

In this way, Joyeux Noel _is different from my view of Christmas. While I’ve thought of the holiday as a way to bring families closer and to spread cheer, I think it’s important to think of Christmas as a time to reach out. I’m not saying put a candle in your window and wait for wayward strangers to join you for Christmas dinner, but maybe invite someone over who may not have someone to celebrate with. And if that person doesn’t celebrate Christmas, don’t worry, because it really doesn’t matter. Christmas has evolved a great deal over time and at it’s purest form — and at the center of _Joyeux Noel — it’s about bringing what you have to the table to create something that’s bigger than the pieces.

No one wants to scroll through holiday selfies alone, and if you can take anything from this movie it’s that even the smallest bit of effort directed toward someone else during the holidays can result in something special. Like I mentioned before, I love Christmas, which is why I owe it to the holiday season to expand it’s reach to everyone possible and that’s especially true when the season had ended. So appreciate what Christmas is to you and try and share in someone else’s slice of Christmas, J_oyeux Noel_.

Father/Son relationship in Arnold Schwarzenegger Jingle All The Way