When I last wrote a “Dishonor for Connor” power rankings about six weeks ago, the landscape for 30th place looked quite different than it does today. The Sabres had a firm grip on last place and some of the other bad teams were beginning to play well.

Then the Sabres won 10 of 13 while Edmonton completely fell apart, and New Jersey and Arizona threw their hats in the 30th place ring.

Now, roughly halfway through the season, it appears it’s time to reconfigure the last-place odds, looking ahead to what teams might do in the second half instead of considering just the very recent past.

First, a few teams who won’t crack the top five for this edition but could in the future if enough goes wrong.

Ottawa: The Senators have just 16 wins so far and have looked unimpressive for much of the season. Ottawa is 25th in the NHL in corsi for percentage (measures possession) but is staying afloat because of stellar goaltending from Craig Anderson (.927 save percentage).

Philly: The Flyers have earned just one point in the past five games, dropping them into the last-place conversation. Whether the team is too talented to compete for last remains to be seen.

Colorado: Still a poor possession team, but some of their skill guys have been finding the back of the net more often lately. And how about 35-year-old Alex Tanguay leading the team with 25 points?

Columbus: Burdened by a ton of injuries but they’re winning more. It’d take a lot to drop them back into the bottom five.

Now, here are the teams who are doing it right — and by right, I mean, really playing badly in order to land Conor McDavid.

Recently, New Jersey suffered through a streak where they lost 16 of 20 games (seven in overtime or shootouts). This dropped them all the way to 26th overall with 35 points earned in 41 games. So on the heels of what will likely be the worst streak of their season, the Devils barely crack the top five? That’s bad news for their McDavid hopes in all likelihood. New Jersey is a bad possession team (21st in corsi for percentage), but not terrible. Goalie Corey Schneider was good in the first half (.917 save percentage) but has the potential to be better in the latter half of the season.

The Devils are bad, but not awful enough to compete for last overall, and that leaves them in an interesting spot. They realistically have too many solid players to “catch” Edmonton or Carolina. But that also offers them an opportunity to stockpile prospects and draft picks in deadline deals.

They’re essentially where the Sabres were in early 2013. The Sabres were bad, but not last place bad. Within a year, they dealt Jason Pominville, Thomas Vanek, Jordan Leopold, Robyn Regehr, Ryan Miller, Matt Moulson, Cody McCormick, Steve Ott and Brayden McNabb. The list of prospects and draft picks that yielded is too long for me to care to list. Cliff notes: the Sabres now have the deepest prospect pool in the league. This should be a busy deadline for Lou Lamoriello and co.

There’s an old saying that states you have to be good and lucky to win in professional sports. Well, to stay in the 30th-place conversation, you have to be bad and unlucky. The Coyotes have been both. Arizona is 20th in corsi for percentage, 28th in save percentage and 28th in shooting percentage.

The normally solid Mike Smith was terrible before losing his job to Devan Dubnyk (who has been good). Meanwhile, the team’s shooting percentage is down a half a percent from last year. That’s not a ton but this team should be scoring just a tad more than they are now.

While the Coyotes have a tough schedule overall, they’ll have a relatively easier January. With Dubnyk getting more playing time, we’ll see where this team goes in the next month before deciding if they’re bad enough to finish last.

It appears the Sabres have gotten all the good luck out of their system. After winning 10 of 13 in late November/December, the Sabres have earned just three points in the past nine games and have been outscored 41-14. I could go over some stats and explanations but it should suffice to say the Sabres are terrible. They’re the worst team in the NHL. Excluding shootouts, they’ve been outscored 135 to 71 this year.

But, surpassingly, last place overall is far from a guarantee for the Sabres. Buffalo is three points ahead of Carolina and four ahead of Edmonton, both of whom are legitimately terrible.

The recent hot streak was a mirage, dripping in almost unbelievable luck. The team’s PDO (follow the link if you’re not familiar) was a wildly unsustainable 105. But the 20 points earned in that span don’t go away because luck was prominently involved. As currently constructed, the Sabres are the worst team in the NHL. Whether or not they’ll be bad enough to allow Carolina and Edmonton to pass them remains to be seen. Regardless, GM Tim Murray seems to have a plan and the right prospects to put it into place. This should be the last year the Sabres routinely put an embarrassing product on the ice.

The ‘Canes are last in the NHL by a mile with a 5.7 shooting percentage at even strength. This isn’t a poor possession team but the skill just isn’t there and they’ve been dealing with a slew of injuries since the preseason. Their best guys just haven’t played well this season. For example, Alex Semin has just six points in 22 games this year. Meanwhile, the goaltending has been below average with Cam Ward carrying the load and Anton Khudobin backing him up.

The good news is, with Jordan Staal’s return from injury Friday night, the team is as healthy as it’s been all year. The bad news is they still won’t be very good. The team might start to consider which pieces it will be moving at the deadline in a few weeks. Andrej Sekera could very well be the best defenseman on the market and could yield a pretty big haul.

As for Carolina’s last-place odds — it really depends on how much the shooting percentage has been determined by luck and how much it has been determined by skill. It seems reasonable that they might see some positive regression in the coming weeks, but whatever personnel losses they suffer at the deadline could counteract that. 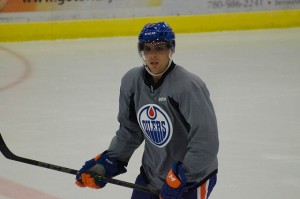 The Oilers are last overall with 27 points in 40 games. They’ve earned six points in the past four games but Edmonton made a trade Friday that makes it seem like they’re ready to give up on the season. They traded two-time 20-goal scorer David Perron for Rob Klinkhammer and a first round pick.

At first glance, that might seem like a standard deadline deal. But consider Perron has another year left on his contract and that the pick will likely come near the end of the first round, where guys usually take three-to-five years to develop.

Perron wouldn’t have made the difference between winning or losing the Stanley Cup in the short-term, but he was a solid player that Edmonton essentially gave away. If the point of this deal is to work further toward ensuring last place, then the Oilers are on the right track.

Edmonton’s possession numbers have dropped somewhat over the past couple weeks as the shooting percentage has risen slightly. The goaltending shouldn’t be this bad all year, but it won’t be good either. The Oilers are bad and it’s clear they’re willing to trade pieces to make them worse. But do they have last place locked up? Not at all.

For starters, they’re only one point behind Carolina. But Carolina isn’t Oilers real competition for last, Buffalo is. Not counting shootouts, the Sabres have a -64 goal differential. Edmonton has a differential of -45. The Oilers corsi for percentage is 49.5 percent. The Sabres is 37.5 percent. The Oilers are six points behind the Sabres, but they’ll have to be worse than they’ve been if they want the best odds on this guy.