Previously, I gave my initial impressions of the Halo 5: Guardians beta and they were overwhelmingly positive. Now as I critique the beta in week two, it is important to note that I still love playing the game, it brings me back every day, but there are definitely issues I would love to see sorted out. So far this beta comes close to my favorite multiplayer shooter of the year, but it’s assuring to know that the game is a full year away from retail release and will have plenty of time to refine itself.

First, let’s jump into the new content introduced in week two; slayer is now featured on map variants of what was seen last week. Essentially these are the same maps that we played on during the first week but that have been edited in forge by 343 to produce something drastically different. Forge will now give players the ability to alter weather, map terrain and wildlife along creating maps that feel completely new (it should be noted that at this time 343 has not specified how many variants will ship in the game).

Eden is a variant of Empire, the map is now at night, features the prophet’s bane power weapon, and has drastically altered map terrain creating two high catwalks and a pit underneath. Eden plays drastically different from Empire; slayer is now a horizontal struggle and controlling the two separate power bases for weapon drops instead of the vertical struggle over sniper positions. Players will dominate on this map by using elevations and the new verticality introduced.

Regret is the variation of truth (midship) and it was hard to notice the similarities; the truth ship crashed on an alien planet meaning it now takes place in the daylight, instead of space, and is overgrown with wildlife. Regret features the new hydra power weapon and a more open lower floor transitioning the map from a battle of four bases to an all-out brawl. The map variations fundamentally changed how games were played, and in the hands of the public these tools can create limitless game possibilities.

A second game mode was also introduced in the form of breakout; a single life, eliminate the opposing team, best of nine game mode that plays nothing like slayer. This is still four versus four eliminate the other team, but all the other rules have changed. The game mode takes place on trench and crossfire, two maps created in the new forge builder from scratch. The maps are compact and feature varieties in elevation, large amounts of cover and no power weapons with limited weapon pickups.

Breakout is a fresh change of pace from Slayer and requires a different game plan. Players start with sub-machine gun and magnum and can only find the AR and BR on the maps. There is no health bar and only limited shields, giving players essentially half health and there is no radar. There is only one life per round, making rushing in a dangerous option and it makes players more cautious and nervous. Grenades are also crucial in this new game mode as it only takes a single toss to kill an enemy player. While Slayer encourages players to run around getting into gunfights, Breakout discourages reckless behavior and punishes players for charging straight into battle. A player can be eliminated with a single shoulder charge in Breakout and winning a game while outnumbered is almost impossible.

Breakout isn’t original; we have seen round based single life game modes in multiplayers before. But it does put a twist on the Halo formula. By cutting health and limiting weapons breakout does differentiate itself from its competition and creates a team oriented and methodical game mode in the process. The game mode showcases some of the technical issues the game faces though.

Right now the online matchmaking servers are terrible; there is no way to back out of a game search (other than restarting the beta) meaning you might be sitting in a lobby for minutes before you are kicked back to the main menu. Additionally, if a player quits the game, you still lose rank. Whether players are lagging and dropped (which has happened to me) or they quit the game, you are still expected to win the game.

In Breakout, being down 4-2 or 4-3 from the get-go is a death sentence; there is almost nothing your team can do to pull of the win, but you still lose rank for losing the match. It is extremely frustrating to lose rank when there was no way you could have won the game. The servers and matchmaking need to go through drastic improvements to be ready for the full game launch. 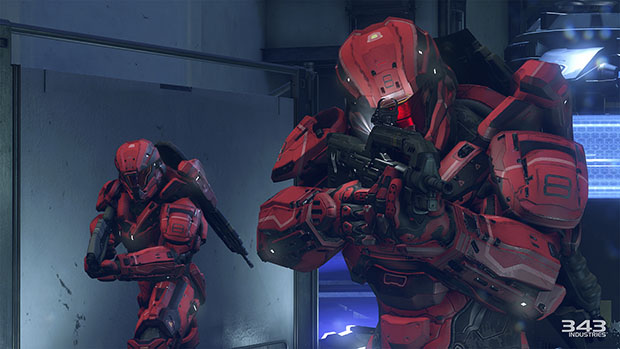 While I love what the ranking system is bringing to the table, there are definitely problems with it. Once a rank is achieved (silver, onyx) you can’t lose it. This means that players who got lucky or hot through their initial qualifying games will get a high rank and never lose it. Players can bottom at gold 1 but they will never drop to silver no matter how poorly they play. This makes the game very difficult to play solo. I head into matchmaking paired with a team of rank equal to my own, but it’s hit or miss whether they will be good or absolutely terrible.

If I am playing with a group of players of equal rank against a similar group of players, I want a competitive game, but more often than not I find myself on one end of a blowout game. It’s like showing up to a game of pickup basketball against guys of my height and weight, only to find out they are aliens who stole powers from NBA players and have come to enslave me and my friends. Players with negative kill to death ratio (KD) should not be above a silver ranking but I find them with onyx rankings, and similarly I know players with +350 KD that can’t crack gold. At this time, the game punishes players for playing alone online making me less motivated to go online.

There are some issues in gameplay that I would like to see improved in the finished game. As I mentioned before, grenades are over powered; in Breakout, a single grenade can kill a player, giving them a new sense of power and importance but also creating a level of frustration. In Slayer, grenades make a player one shot, which is worse when coupled with the fact that everyone begins every life with two of them. A grenade doesn’t need to be accurately placed, they have such a large radius and damage output that they can be tossed around the small maps without remorse. Additionally, I find that my grenades are shot in the air far too often. Hitting a grenade in the air with a bullet is an impressive feat, something that happens frequently over the course of a Slayer match. This has made throwing grenades a risky maneuver and makes it not a viable option in fire fight — you are more likely to hit yourself than the enemy.

Slayer introduced battle rifle starts instead of the assault rifle, changing the game as much as what the maps did. Battle rifles make the game more of a long distance tug-and-pull rather than the up close and methodical assault rifles. Battle rifles also seem overly powerful in the game; while it lacks a little from the designated darksmen rifle (DMR), the battle rifle can easily take out an enemy from any distance with just four well placed shots. The thing that makes this core Halo feature overpowered is that in Guardians it does not feel like you are accurately warned of your immanent death. My screen isn’t flashing red and my spartan is running scared when I lose my shields to BR fire, and before I know it I’m dropping dead. It continues to surprise me and feels like I have no warning to get out of the way and hide. Once shields are eliminated, the health bar is so small that I need to be alerted immediately to hide. A BR headshot will completely eliminate the health bar, in an act so jarring it will feel like you were actually sniped.

A small feature which seems overlooked is that when you kill someone after dying you aren’t alerted about it; if you simultaneously BR, melee or grenade kill someone, there is no medal telling you of this. A small thing but it shouldn’t go overlooked in the improvement of this game.

Moving onto the weapon arsenal: why is there a light rifle, bro? I understand that there will be Prometheans, but in a world with the BR and DMR, the light rifle is a waste of space. I have mixed opinions on the hydra; its painfully slow reload and poor hip fire accuracy features make it unusable in a fire fight, but if you lock onto a target using the ADS it is an instant kill. Trying to use it like an old school Brute grenade launcher isn’t the same, but locking onto a target produces heat seeking missiles that down a spartan in three rounds. I don’t recommend using the gun, but pulling it out on an unsuspecting rival will guarantee an instant kill.

If your aim is true and you target the head, the magnum is a viable weapon once again. The pistol can down enemies from moderate range and is an adequate last resort weapon. The SMG on the other hand is an overpowered monster of a gun. Get within medium to close range of an enemy and the SMG will out duel the BR, DMR or AR. The fire power and fire speed of the SMG make it the go to gun for anyone who prefers close quarters duels. Finally the prophet’s bane (energy sword) is over powered. The sword is a staple and pillar of the Halo core, I accept and enjoy that, but sprinting and thrusters make it god-like. Combine sprinting with the lunge range of the PB and it’s guaranteed a kill; using the thrusters to get within lunge range seems almost unfair. The biggest problem with the sword though is that once a lunge is started, nothing will stop it. If I use my thrusters to burst away from my lunging enemy, the game will carry that enemy forward extending his lunge and killing me anyways. That’s a borderline broken feature that bothers me to no end. With thrusting an option for the sword carrier and not the target, they become an unstoppable force.

The Halo 5: Guardians beta has me logging on to play every single day, and I can’t wait for the new content next week. While there are a variety of issues, especially technical ones that need to be fixed, let’s take a breath — it’s just a beta. This isn’t a server beta similar to Destiny; this is a full game beta that will take into consideration all thoughts and concerns from the active players and 343 has a full year to change anything. So listen up 343, take notes, because if you make the improvements, Halo may be the best shooter of 2015.