HBO unearths one of the most notorious crime mysteries of the country in the six-part documentary series premiering this Sunday, The Jinx:The Life and Deaths of Robert Durst. For the first time, secretive Robert Durst breaks his silence and dishes on his involvement in two murders and the mysterious disappearance of his wife in 1982.

Director Andrew Jarecki is a) not new to crime documentaries (See: Capturing the Friedmans) and b) not new to the events following the disappearance of Kathleen Durst. Jarecki directed the 2010 drama All Good Things inspired by the aforementioned events and which ultimately led to the production of The Jinx. The documentary series is the result of eight years worth of investigations, putting together data and questions by Jarecki.

At the HBO offices in New York City last week, Jarecki explained that it was Robert who reached out to him after watching All Good Things.

“He said you know more about Bob Durst than anybody and I think we should sit down and talk,” Jarecki said. “So we ended up having this very open conversation and it was clear that he was willing to say a lot of things that would interest the audience.”

Jarecki is heavily invested in The Jinx. He is not a mere detached observer the way some documentarians try to be, his involvement is clear as he weaves in and out of the frame forcing the audience to question whether he is the appropriate storyteller. But it becomes clear that our distrust is less about Jarecki’s self-described obsession with the Durst’ mysteries and more about the monotone and bizarre interview with Robert. From his raspy voice to a habit of blinking hard, nothing about Robert invokes trust.

The Jinx promises insight into the strange and sometimes deadly events surrounding Robert Durst with new answers to not only the unresolved case of Kathleen Durst (she is widely believed to be dead) but to the murders of Susan Berman and Morris Black. In the two episodes revealed by HBO to the press, Robert speaks openly and admits to the violence that was affecting his marriage to Kathleen prior to her going missing and that he lied to the cops upon her disappearance in 1982.

Years later, Robert was acquitted on the murder of his neighbor, Morris Black in Galveston, Texas. He later admitted to killing and dismembering Black in 2001. Robert has served time in jail for lesser charges. 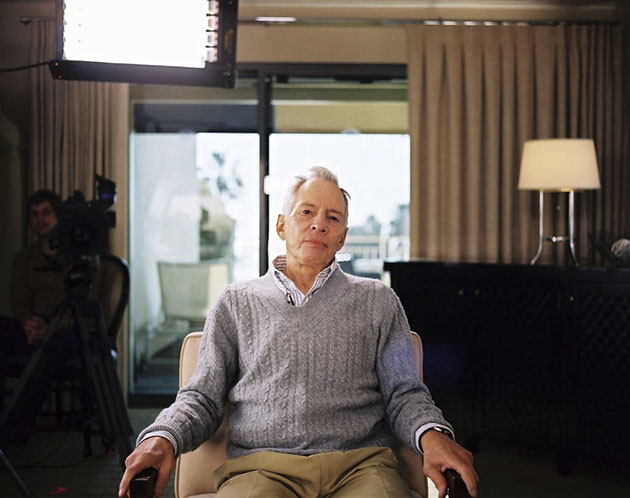 Robert Durst speaks for the first time in HBO’s The Jinx: The Life and Deaths of Robert Durst (Photo provided by HBO via Twitter)[/caption]

Jarecki explained that the Durst family of the Durst Organization (New York City real estate giant) has been uncooperative towards the production and premier of the documentary.

“They have been so hostile to us ever since the beginning and it’s only made it more interesting to me,” said Jarecki who explained that the Durst family has threaten to sue in several occasions in spite of Jarecki’s desire to get their side of the story as well. In a New York Times piece, Douglas Durst, Robert’s younger brother and chairman of the Durst Organization views the documentary as a weapon to shame his family.

“You got to ask yourself why that family is so anxious about this story being out there,” Jarecki said.

The Durst family is the type of rich few understand. Whether the actions of Robert are linked to his access to ridiculous sums of money is uncertain but like wealth, Robert exhibits a neutral coldness and disinterest for human life. Robert’s tone is what makes the documentary enthralling and in true HBO style the rawness makes it hard to look away.

The Jinx has already been widely compared to the Serial podcast—it’s more like what a Gone Girl and Serial baby would look like—but Jarecki claims that unlike Serial, The Jinx provides much needed clarity.

“You will know what happened,” Jarecki said.