Please, please, please, everyone calm down. I know the NHL season is starting up and all of the sports networks are hyping it up… OK, so maybe not yet, but maybe, just maybe, next year. Let me explain.

Today, October 8, marks one month since TMZ released the footage from inside the elevator blowing up the ticking time bomb that was, and is, the Ray Rice scandal. In just one month things have totally unraveled for the NFL, and over the past few years things have been quietly unraveling for the sport of football. Any time that your commissioner is under investigation and facing dismissal, you know things can’t be good. In addition to that, we know a lot more about the risks of head injuries with football. More parents are second guessing their kids playing football than ever before — and that even contributed to the 2011 NFL Lockout.

The NFL and the sport of football is vulnerable, and the NHL, of all the sports, is in the best position to take advantage.

The MLB playoffs are proving to be incredible as they do almost every year. But everyone loves the playoffs of every sport — I mean, we are talking about playoffs. Don’t get me wrong, I love baseball. Baseball is an absolutely beautiful sport. But it’s painfully slow, and it’s certainly not made for TV. Something that was once America’s past time has now become irrelevant until the post-season. (Partly to blame might be the ludicrous 162-game schedule they play.)

All summer, baseball plays second fiddle to whatever NFL or NBA news ESPN can scrape up. Which leads me to basketball. People love to watch dunking and they love March Madness. But the madness is contained to March — College Basketball is a much different, minor version of itself until late-February — and the NBA is dominated by a few teams, deeming the regular season mostly useless. Analysts are constantly calling for a shorter NBA season. Does it really take 82 games for the majority of the league to make the playoffs?

Hockey, however, has all the ingredients to infiltrate the NFL’s territory beginning this winter, and possibly even on a more permanent basis next fall.

The NHL has big hits, dazzling saves, fights, exciting plays, great commentary, goals (I swear!), power plays and most importantly: it’s fast. It is versatile as both a terrific viewing experience in person or TV. Hockey’s biggest problem is getting people to watch for the first time. Like many great things, it just takes once to get hooked in, like the first time you fight past the bullshit and actually watch Crazy, Stupid, Love. (Editor’s Note: Yes, Joe Mags loves Crazy, Stupid, Love.)

Many people after watching their first game are hooked, and that is exactly what the NHL is going for with the Stadium Series. As much as I dislike the idea of a series and am a fan of the single “classic” game, it does its job and is a smart move by the NHL. The average fan will always tune in to the Winter Classic or the Stadium Series. People will put it on the television on New Year’s Day while sitting on the couch at Grandpa’s house. The NHL is slowly capturing the people who have never really watched the game and turning them into some sort of fan of the sport.

That was the NFL’s recipe of success for DECADES: gobble up millions and millions of casual fans and guilt trip anyone left on the periphery to join in and buy a jersey! 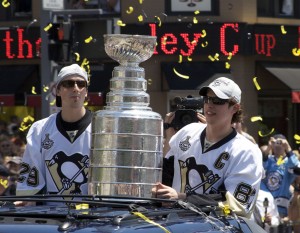 Players like Sidney Crosby and Marc-André Fleury are bringing much needed popularity back to NHL.
(Photo taken by Michael Righi)[/caption]

The NHL doesn’t stop there with the Stadium Series. Almost every weekend of the NHL season you can find a game on NBC. The NHL has done a good job taking their lead singer, Sidney Crosby, and his backup singers, Stamkos, Ovechkin, Brown, Lundvquist or Kane, and plastering them all over these games. There will always be at least one team that has at least one player that someone who has never really watched hockey will recognize. (A lesson from the NBA.) They are creating an interest throughout the season which leads to their big finale, the playoffs.

There is nothing, and I mean nothing, more exciting than the NHL playoffs. I think a good way to judge how popular a sport is at any given time is to look at your Twitter feed. This summer during the World Cup, I saw a ton of soccer statuses cheering on USA. During March Madness, I can probably fill out everyone else’s bracket just by all of their cries of upsets and cheers for the right pick. I only really see baseball posts because I live in New York and everyone is obsessed with the Yankees, and I see the NBA anytime Lebron makes a decision.

However, besides the World Cup or March Madness, I only see people who I am somewhat aware that they watch the sport they are posting about. Hockey on the other hand, I see new people posting all the time. During the Stadium Series, weekend games on NBC, and especially, the NHL playoffs. Talks of how exciting it was, or how they can’t wait for the next game litter my feeds. I see people taking sides and cheering on certain teams. National exposure is huge for growing anything, and particularly in sports. With teams like the New York Rangers and the Los Angeles Kings making the playoffs, it’s creating a buzz in the biggest cities which is what the NHL needs. Teams like the Boston Bruins, the Montreal Canadiens, the Detroit Red Wings or whoever it might be, all have such personas and such identities that it’s easy to become a fan — even if you’re not from that city. This is the goal of the NHL, and the ultimate copycat move from the NFL’s playbook: create a national league with national fan bases.

It’s easy to become a fan of hockey, and with the NFL becoming the bad guy in sports, it’s time for the NHL to climb up into the spotlight. None of the other sports are in as good of position to do so. MLB is coming out of their steroid-era and slowing to a snails pace. While the NBA is peaking in popularity — the NBA just tripled its annual revenue with its new TV deal — the NHL simply has a more reverent sports product during its regular season. (Let me know when the Cavs and Spurs square off in the Finals and maybe I will consider watching it over hockey.)

Hockey has all the remedies for people that are turning away from football. If your kid wants to play a physical game but you don’t like all the head injury news coming out of football, hockey is right there. When you want to see bodies flying into each other and big fast plays, turn a hockey game on. TV ratings are up for the NHL and have been steadily climbing over the past few years. Every year I see more games on TV and more posts on social media. The NHL is no doubt on the rise after taking a kick and a punch to the gut with a pair of labor lockouts in the last 10 years. They are fighting back as any hockey player would.

With the NFL slipping and the NHL soaring, maybe, just maybe, next year, we will hear more than a whisper before the season starts from the major sports networks. Do yourself a favor this year and watch a hockey game. I promise you won’t be sorry.