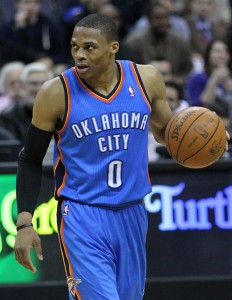 Russell Westbrook is about to go off on this league and I’m so excited. I might wage a generous over/under bet with Joe Mags whenever he invites me on his podcast on the number of games Westbrook goes for 40+ early this season — or at least the number of times he slips up and screams “THIS IS MY HOUSE” while tearing at his jersey.

I absolutely feel for KD, but not as much as I would have had they discovered this stress fracture a month ago during his historic sneaker deal bidding war. Don’t expect me to try and figure out how the offense will run now with Westbrook as the primary scorer. I get the feeling that Scott Brooks sweated out the entire weekend waiting to see what Zach Lowe came up with as a contingency plan on offense. This also probably ends any chance Kevin Durant had at winning consecutive MVP trophies. The upside to this is that KD is expected to make a full recovery from a stress fracture that team doctors treat with the same alarm as outpatient vasectomies.

And now that I’ve paid all the necessary respect and dues to Durant, I can get back to rhapsodies of praise for Westbrook. Which is the dilemma that Westbrook faces in the first place. All praise, shots and isolations must always be bestowed on Durant first, then Westbrook can eat.

Westbrook suffers from the same sort of complex public perception that Kobe once did. He takes shots that we feel don’t belong to him; he is a disruptive force both to his opponents and his teammates. Westbrook doesn’t back down. Simply put, his second best quality after his explosive athleticism is that he has no fear of the moment or his opponent. Where Durant can be mistaken for laid back almost to a detrimental stand point, becoming a spectator in the offense, Russell’s presence is undeniable. A tasmanian devil headed toward the hoop, pulling up from the perimeter, chasing down loose balls and blocking shots — Westbrook does it all.

And yet he has become the lightening rod for all of the Thunders shortcomings: not Scott Brooks, not the front office building a roster with subpar depth, not Durant’s spectator status.

We’ve seen just how beneficial it was for KD’s game to shoulder the burden of the team’s offensive load without Westbrook, which culminated in a MVP trophy. Westbrook won’t have the luxury of running this team long enough to earn that distinction. This is more like driving a loaner. You get the beamer long enough to stunt on everyone who criticized you but you also get a taste of what a sustained experience of this will be. I’ve been insisting to those around me that Westbrook will leave at the end of his contract, and the Thunder will face the uneasy decision of hoping to win him over other teams in free agency or puling the trigger during his contract year to gain back something worthwhile in return.

This taste of freedom might seem innocuous to this season but really it’s the experience of getting to run your own team that will have to play out in the back of Russell’s mind for the next few years. He holds the title on this team that is often given to the likes of JR Smith, Metta World Peace and John Starks. We want him to be a Scottie Pippen, a Joe Dumars — to work in a servile manner. But that’s not Russell’s style: every dunk comes with the risk of him tearing off the rim; every possession is an opportunity to tear into an opponent or a team that overlooked him in the draft; and the number zero on his jersey a constant reminder of all these slights.

Durant’s injury isn’t significant enough that it will launch a “Westbrook for MVP” campaign, however, with this being the longest he will have ever been on the court without Durant, this does present Westbrook with perhaps his only opportunity to shed his scapegoat reputation. And maybe in the process earn himself the title to his very own franchise on the other side of his deal.