The Baltimore Orioles had a legitimate shot at the World Series just a matter of days ago. And they were playing like it. The Orioles weren’t like they are now — on their way back home, wondering what might have been if they hadn’t been hit with a barrage of injuries. No, they were very much alive, as was downtown Baltimore. I should know, I was there. 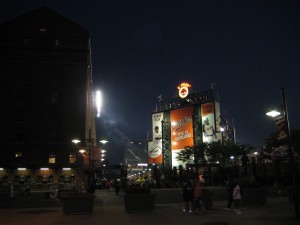 I had been planning to take a trip to Washington D.C. with a pit stop in Baltimore over Columbus Day weekend for months. Back in late summer, when I planned the trip with my girlfriend, I had hoped the Nationals would still be in the playoffs when I made the trip. Then, as the Orioles came on, I hoped both would be in contention. The Nationals folded fairly quickly in the first round, but the Orioles did not disappoint. At least not right away.

Kerri and I made the trip down to Baltimore from Southwestern New York Saturday morning. The plan was to get there, hang out for a couple of hours and then drive to our hotel closer to D.C.

It had been so long since I was immersed in a serious playoff atmosphere. Living in Buffalo, I have almost no recollection of the Bills being anything but a punchline. The Sabres have fared better over the past decade and a half, but the team’s last two playoff appearances ended before the city could muster up any excitement. Really, it hasn’t been since the springs of 2006 and 2007, when the Sabres advanced to the Eastern Conference Finals in back-to-back seasons, with a real shot at the Stanley Cup, that I had any positive mojo going for one of my hometown sports teams.

It’s an atmosphere I missed. People would dress head-to-toe in Sabres gear, even on days they weren’t playing. The papers and sports radio would talk about the team’s chances incessantly. People who didn’t know each other would bring up the game. There was this sense of community – each day was like an extended tailgate leading up to the games. I wanted to be part of something like this again, even if I didn’t have any stake in who was going to win.

As it turns out, I picked a pretty good fan base to observe for just this type of event. Baltimore fans haven’t seen the Orioles in the ALCS since the days of CD’s, VHS tapes and giant cell phones that could reasonably double as a murder weapon – 1997. The opponent? The Kansas City Royals, whose playoff drought is so long, I’m not old enough to make pop culture-related jokes about it.

Kansas City took Game One Friday night to win their fifth consecutive playoff game, seemingly all in close/dramatic fashion. But it was just one game and the Baltimore faithful weren’t deterred. We got to Baltimore around 2 p.m. and went straight to Fort McHenry (sidebar: I had no idea how important Baltimore was to the War of 1812 and Civil War efforts. So, the city has that and The Wire in its favor and Ray Lewis working against it. We’ll mark it up as a draw).

After leaving the fort, Kerri and I parked downtown and followed a mass migration of orange shirts and hats to the stadium. The walk was a mile or so and as it went on, the group grew larger and larger. It struck me how most of them were wearing jerseys and shirts for guys who wouldn’t be taking the field that night. Cal Ripken Jr. was obviously the most popular one. There was also Brooks Robinson and a few other former players. Matt Wieters, Manny Machado and Chris Davis also had a solid showing, despite the fact that none of them have taken the field in the playoffs this year (Machado and Wieters are on the DL, while Davis has been suspended for PED’s). No one on the current team, aside from Adam Jones and Nick Markakis, really has the talent to warrant buying a jersey. The Orioles, despite their 96 wins and top-notch run differential, are underdogs in this regard.

As we got nearer to the stadium, there was a group of children on a corner, clad in Orioles gear, holding signs urging cars to honk for the Orioles. Most that passed obliged.

A man walked toward our migration, in the opposite direction of the stadium. Decked out in his white dress shirt, orange tie and old-looking jeans, he was looking for his friends. When he finally found them, one asked the inevitable “what the hell are you wearing?”

The courtyard outside Camden Yards was awash with orange jerseys and pregame chatter. Lines to get in the stadium were hundreds of people long. Kansas City fans mostly kept their heads down and avoided ridicule. The city and the stadium were alive. Alas, I didn’t have tickets, nor would my ambivalence warrant a seat in such an atmosphere.

We walked to an Irish Pub about a half mile from the stadium to grab dinner. It wasn’t overcrowded, but those in attendance were glued to the game and decidedly pro-Orioles.

By the time we were seated, Kansas City had a 2-0 lead. The restaurant was quiet, for a while it seemed many weren’t all that invested in the game. That changed in the bottom of the third when Jones hit a two-run shot to tie the game at three. The pub was filled with cheers and claps. The people hadn’t stopped watching, they just needed a little ray of hope to get them more invested in the game. (We’ve all been there.)

The crowd remained loud as the lead began ping-ponging between the clubs. Mike Moustakas hit a home run the next inning; the crowd openly questioned Bud Norris and his pitch selection. Then Nelson Cruz hit into an RBI fielder’s choice to take the lead back.

Somewhere around the sixth inning, we left the pub. We still had to drive to our hotel and I wanted to walk around downtown Baltimore a little more. I followed the updates on my phone but I knew what was coming. The score remained tied at four deep into the game. Baltimore’s only chance was to beat up on the starter Yordano Ventura; we all know Kansas City’s bullpen is unhittable.

As we ventured to find our hotel in New Carrollton, the Royals offense beat up on Zach Britton to take a 6-4 lead. The Orioles offense went quietly in the bottom of the ninth. Steve Pearce struck out to end the game; he’d make the final out in Game Three as well, a game that was postponed Monday and played on Tuesday. By Wednesday night, the Royals had one their eighth-straight baseball game and the Orioles were heading home.

I’m glad I was there to see Baltimore cheer on its team while it lasted. And, as the baseball Gods would have it, another great story lives on. Kansas City and its fans will cheer on their team in the World Series for the first time since the Reagan Administration.. or so I’m told.