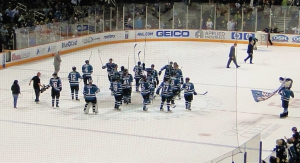 It’s fairly common knowledge for hockey fans that the Red Wings have made the playoffs an incredible 23 years in a row. However, the team with the second-longest streak (and perhaps will become the longest if Detroit falls off this year) isn’t often discussed in such a reverent manner.

The San Jose Sharks have played into the postseason 10 years in a row and 15 of the past 16 years. They’re likely to do it again this season. They have at least one future Hall of Famer (Thornton) and possibly another in Patrick Marleau.

Yet, somehow, the Sharks have not had their day in the playoffs yet. Only three of those 15 trips to the playoffs have ended with a conference finals appearance. They’ve never been to the Stanley Cup. There’s been some heartbreak — they’ve lost seven-game series to Los Angeles the past two seasons (including blowing a 3-0 lead last season).

Now, due to a strange offseason, it appears San Jose’s window might be closing. Thornton and Marleau are both 35, they won’t be around forever. Yet, the front office did very little to give them an edge in the Western Conference.

After last year’s meltdown, the front office signed famed face punchers Mike Brown and John Scott to man the bottom lines. The team has very little forward or defensive depth. Annti Niemi is an average goalie on his best days. That doesn’t bode well for a postseason where they may have to take on a combination of Los Angeles, Anaheim, St. Louis, Chicago and Dallas.

They’re still a playoff team, of course. Joe Pavelski is in his prime, Logan Couture is very good, Brent Burns looks great this year, Marc-Edouard Vlasic should be on the all-underrated team for defensemen and Tomas Hertl looks like a budding star. But with the goaltending and depth issues that weren’t addressed in the offseason, it’s hard to see them being a serious contender for their first ever Western Conference championship.