Note to the reader: The following article contains hideous hero worship, blasphemous insights and very little statistical backing. I will not defend myself. This is purely a religious experience based solely on my faith, a faith in James Naismith’s one true favored son – Boogie Woogie Cousins.

As a Laker lover, this season has been as torturous as being drugged with an illness-inducing poison and taping my eyes open, constraining me to witness Nazis rape and murder people to the soundtrack of Beethoven’s Ninth, forever corrupting my love for music and effectively ruining my life – perhaps even worse. Kubrick’s film is actually more of a light-hearted, Woody Allen flick compared to the slaughter I am privy to every game; Alex DeLarge had it easy.

The only way to recover from my agony is to watch better basketball. That is, really, the only way to recover from any agony. Charlotte has become a personal favorite of mine. Aside from gawking at their bomb-ass jerseys and Michael Jordan on the sidelines – reminding me, at the very least, of the essence of Kobe Bryant – I shamelessly search for highlights of Sir Lancelot snagging rebounds from Al Jefferson’s hands so that he leads the team in a category that he has no business leading in. Every once in a while, I believe that I see Lance wander over to the scorer’s table and make a few edits. Jefferson doesn’t realize it yet but he is a bit slow on the uptake. But seriously, Jefferson is slow – really slow.

However, I must admit, there is no team I enjoy watching more – during the Lakers’ infinite drop over a raging waterfall – than the early season’s success story: DeMarcus Cousins. When the Sacramento Kings finally transferred their franchise to the city of DeMarcus last season, there was a lot of skepticism: Would Rudy Gay be able to find a large enough apartment under the DeMarcus’ jurisdiction to keep him there? With Isaiah Thomas gone, which Cousin was going to help out on the scoring end – certainly not Darren Collison, right? And what about DeMarcus — is it a big enough city to maintain the hype of a basketball franchise?

After a 4-1 start, all the speculation has been put to rest: the Cousins are working as a family, even Casspi, the adopted Israeli that brings energy and good looks off the bench. At times I feel like they are the greatest team I have ever set my eyes on. It is difficult to describe, but there are no excuses – I must share my experience with the world.

While watching the Wildebeest which is Kenneth Faried and his Nuggeteers take on the Cousins this past evening, I was transported into another world. There exists an undisputed Man-God in this paradise, a faultless creation – the namesake of the Cousins themselves… 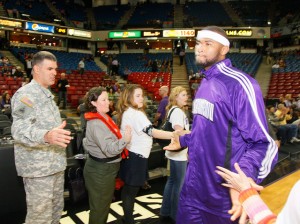 The collective masses of Boogie fan-boys have been parading out of their holes and rejoicing all over the world. Currently, it would be no trouble to find a Boogie article linked to the bottom of every sports page on the Internet. Try it… Seriously. That might raise the question: Is another Boogie article too much?

The answer: NO! THERE CAN NEVER BE ENOUGH BOOGIE. THERE IS SIMPLY TOO MUCH BOOGIE TO BE DENIED.

En route to his massive 30 point, 11 rebound night, shooting over 70 percent from the field and an uncanny 90 percent from the charity stripe (all in 22 minutes…WHAT?!), I felt like I was sitting on one of those immaculate, fluffy, off-colored trees in Dr. Seuss books while a fairy massaged my fingertips and sang “Kiss From A Rose.” Boogie is “my power, my pleasure, my PAIN.” Baby, he is a grown addiction that I can’t deny. Tell me, is it healthy?

It doesn’t matter; I accept Boogie as my lord and savior.

Every time Boogie touches the rock, I pull out my Staples easy button, re-calibrated to play “Dance!” and then allow a momentary pause while Get-Down-Tonight Cousins surveys his options, but inevitably scores with an intoxicating display of shoulder jabs, tall dribbles and an utter disregard for the insignificance of others around him. As soon as the ball floats through the net, the button follows with “BOOGIE WONDERLAAAND!”

I am transported into an inexplicably warm Antarctica, where emperor penguins wobble around singing Earth, Wind and Fire, constantly breaking out into an abridged form of “The Carlton.” (I mean, without legs, there is only so much a penguin can accomplish.) All the baby penguins play around a giant ice sculpture of Boogie posed in a superman stance, sliding down his perfectly sculpted biceps into a rainbow-colored pool. The mama penguins happily observe from a distance, dropping grapes into Boogie’s mouth until their husbands come back from chowing down and…Wait! Boogie got the ball again. (Thank God. That was getting a bit inappropriate).

Dance! (Pause. Wait for it. Waaaait for it. He scores!) BOOGIE WONDERLAAAAND!

Penguins rejoice! For those of you imagining Happy Feet – I can’t blame you and don’t want to blame you anyway. Any opportunity to remind us of Robin Williams is a treasure and Happy Feet permits such a reminder. Thank you, Boogie. We are forever grateful for your generosity.

Leave Wonderland for one moment and rejoin me in DeMarcus, where the visiting Nuggeteers front line consists of Kenneth, a werebeast with dreads; Timofey, a giant Russian on a mission; and Jusuf, a rampaging hulk whose sole purpose is to throw people down and laugh at them for pronouncing his name wrong. Oh, JaVale McGee plays too. (Crickets). This, for the most part, is a scary group of individuals. I’ve awoken from my slumber twice in the past few weeks because of this nightmare:

I need Bill Simmons to hold me and tell me that it will be alright… and then Boogie does this:

Yes, Casspi! Cheer for him! Nurkic will haunt no more dreams.

Perhaps the only negative about watching the Cousins is that Boogie plays less than half the game most of the time. That is the most incredible facet of his witchery. He manages to produce outrageous production in a fraction of the time that everybody else is on the court. In five games this year, Cousins has averaged 24 points and 11 boards in less than 30 minutes. Meanwhile, Kobe played 44 minutes against the Suns the other night and launched almost a jumper per minute. Last time he shot that much he was en route to 81 points. But Cousins? No, he is relegated to the bench because the rest of the world cannot get down with his epic booginess. On the plus side, he still makes the game great from the bench, like when…

Wait! Everybody stop. Something isn’t right:

… That was close. Omri gets the assist.

Now, returning to my point about Boogie’s bursts of destruction, I recall the beginning of the game. In the first six minutes of the opening quarter, Boogie dropped a dozen points before calling for a breather. He was tired and who could blame him? I would be tired of scoring on a toddler that can’t check me. It weighs on a man. He will never understand why others cannot be great like him. The Associated Press wrote:

Cousins carried on a running conversation with Nuggets coach Brian Shaw the entire game, and at one point walked over to Denver’s bench and needled the players for the way they were defending him. “Are you guys kidding me?” Cousins said as he walked by. Shaw was disappointed his players didn’t respond. “Nobody else took it personally,” Shaw said. “The way I feel about that is if nobody wants to stand up to it, then we should get out butts kicked and we did. He should talk to us that way if we don’t have any professional pride as a group.”

Shame on Denver. Boogie just wants to play a decent game and they deny him that opportunity. I wouldn’t be surprised if Boogie asks Darren to slow the fuck down a bit so that he can spend more time on the court and enjoy his utter destruction of the defenders’ miserable lives.

It’s a dance and Boogie is the leader. But why can’t we just dance all night? There was another moment when, in a fascinating moment of unity, Jason Thompson was called for a foul and Boogie threw his hands up in the air, as if to say, “Daaaaaaaaamn, come on, Ref! He was straight up!” Casspi, the greatest teammate alive, soon followed in the gesture and then Thompson as well. Boogie put his arms down, momentarily, and his team followed before they all swung them up again in unison, as if they all told the referee at the same time it would help their cause. Before my very eyes, I could have sworn that coach Malone and his bench were taking part in the synchronized arm flapping and, in no time, the entire crowd joined the Boogie Penguin Dance.

“If you hate that call, put your hands in the air! We have to change that call, tell the refs ‘That ain’t fair!’ ” – Beauty.

Sidebar: Imagine Boogie after retirement. He joins Dancing With The Stars and has to twirl around a woman who could be strapped to his leg and pass off as a knee brace (albeit a beautiful one). I don’t really know where this sidebar is going, but the image of an older, matured Boogie dancing to “September” with a professional, dancing goddess drives my dreams to an elite tier.

Watching a Cousins game is like watching Space Jam while under the influence of basketball ecstasy, although, I’d be fearful of a Monstar with Boogie’s talent. Boogie is already a Monstar with a stylish goatee and if there is anything we know about the Monstars, it’s that they are not fair. But that’s what it is to play against Boogie – unfair – and we all love it.

I will gladly watch players bow down before the Boogie Woogie on his way to the greatest record in franchise history, with their only excuses for their poor defensive effort sounding like a little brother after getting into a fight with his big brother: “It’s not fair! You’re bigger, taller, stronger, more skilled, more experienced, have cool tattoos, own a continent of penguins AND you’re better looking. How could I beat you?”

Watch a DeMarcus Cousins game. It’s the only round trip ticket to Boogie Wonderland and is basically the best basketball on television. Boogie with Boogie Woogie and let him fill your hearts with love for all things basketball. If nothing else, the DeMarcus Cousins play a brand of basketball that will transport you to greater heights and cuter birds than you and the penguins themselves ever imagined.

Make sure, however, that you purchase plenty of these, press the button and cue the music…