It’s been about two weeks since the silly stick/ball sport that grown men play in their pajamas came to an end. Now it’s time to hand out major awards. Some of these may be cut and dry, which conceivably could take away from the fun of “awards week.” Still, it’s fun and important to recognize dominance and greatness.

* Note: Rookie of the Year awards were given out after I finished this column. At least I got it right.

The Mashiro Tanaka injury robbed us of one of the great – perhaps the greatest – one-two rookie punch in American League history. Can you imagine someone as prolific as Abreu not winning Rookie of the Year? Incredible.

He finished fifth in the league with a .317 batting average, fifth in on-base at .383, first in slugging at .581 and tied for third with 36 home runs despite missing 17 games. So, how good can Abreu be? This is probably the peak of his powers. He isn’t as young as most rookies – he’s 27 and will be 28 on opening day. Baseball players tend to be at their best during their age-27 season.

Still, if this is what you can reasonably expect from him, I’m sure the White Sox will take it.

Speaking of older rookies, the 26-year-old deGrom made his debut this season. One of the many talented, young Mets pitchers, deGrom posted a 2.69 ERA in 22 starts. He wasn’t overly dominant, but incredibly consistent. He allowed three earned runs or fewer in 20 of 22 starts and failed to reach five innings just once. If all goes well, deGrom could be starting a playoff game in Citi Field in October 2015. Since this is the Mets we’re talking about, good luck with your Tommy John recovery. We’re all pulling for you.

This is probably Felix Hernandez’s award to lose, but it shouldn’t be. Kluber pitched lights out all season despite playing in front of a below-average defense. His ERA of 2.44 was third in the American League but his FIP (fielding independent pitching) of 2.35 was first by quite a bit. He blew away his career highs in innings (235.2) and strikeouts (269). For those that care about such things, he won 18 games and pitched as well as anyone not named Clayton Kershaw down the stretch. His team may have let him down, but the BBWAA shouldn’t. 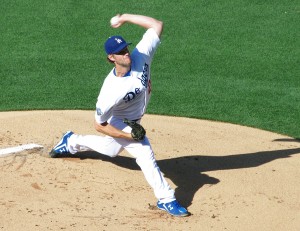 Playoff performance notwithstanding, Kershaw just put out the most impressive two-year stretch since the Pedro reign of the late 90’s. After an injury and a slow start, he tore through the National League like Danny Almonte in the 2001 Little League World Series. He allowed 25 runs in his last 21 starts. For an 11 start stretch in June and July, he allowed nine earned runs. He went at least seven innings 19 times in his last 25 starts and allowed two runs or fewer in 16 of those starts. I could go on forever but these two numbers really tell the whole story:

Somehow, during his objectively worst season, Mike Trout will almost undoubtedly win MVP. That’s not to say Trout has been bad – he certainly deserves the award. It’s just that he, at the age of 23, could be in line for his third MVP award. Only Barry Bonds has won more, and we know not many people take his final four awards very seriously.

Trout is an all-time talent. His WAR (28.2 by Baseball Reference standards) is the best for any 23-year old in history and he won’t turn 24 until mid-August 2015. His batting average and on-base dropped a tad in 2014 but he led the MLB with 84 extra base hits and hit a career-high 36 home runs.

Trout may have two fewer MVP’s than he should at this point, but he’s a good a bet as any to chase Bonds’ record.

Kershaw would be the first pitcher to win NL MVP in 46 years. He’d be only the eighth pitcher to win three Cy Young awards. He’ll be 27 on Opening Day 2015. Barring any injuries, he has a chance to be one of the great pitchers of all time. Hell, he already is one of the great pitchers of all time. Aside from Pedro, he’s the most dominant pitcher of the post mound-lowering era. Five Cy Young? Three MVPS? The last 300-game winner? None of this is out of the question.