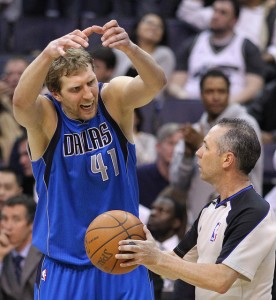 A couple longtime NBA superstars moved up some historic lists this week, each in different ways. Dirk Nowitzki is now the ninth-highest scorer in NBA history, while Kobe Bryant, who is on track to pass Michael Jordan sooner-than-later in total points, set the record for most missed field goal attempts in a career. NBA teams did not do much moving up or down on my power rankings this week, with the Miami Heat as the only team to rise or fall more than four spots. (They fell.)

30. Sixers (0-9, even) Did coach Brett Brown purposely kick the ball to avoid winning his team’s first game of the year? Of course we do not have any evidence to back that up. But Brown’s foolish actions were the reason for the team’s loss to Houston.

29. T’Wolves (2-7, down 2) Minnesota is doing a good job spreading the love without Love, as it basically has nine players averaging seven points or more. Andrew Wiggins does not try to force the issue and has had some success to show for it. He has also been a serviceable perimeter defender, a skill that will only improve over time.

28. Lakers (1-9, down 2) Bryant is not letting his age slow down his scoring numbers. He is taking a ridiculous 24.4 field goal attempts (his most since ‘04-‘05) despite converting on less than 38 percent of them. L.A.’s defense is so poor (last in opponent shooting efficiency) that Bryant feels the need to try and make up for that on the other end.

26. Pacers (4-7, up 2) Frank Vogel continues to prove his worth as one of the better coaches in the league. He is expecting a lot out of bench-caliber players and they have delivered to the best of their abilities. Indiana has two impressive wins: at Miami and at Chicago.

25. Nuggets (2-7, down 1) The Nuggets are having a lot of trouble stopping opponents as they are giving up the most free throw attempts per game. The fact that they are 26th in shooting efficiency is not exactly helping their cause. Danilo Gallinari’s downfall may be a big reason for their weak shooting outcome.

24. Celtics (3-5, down 4) Marcus Smart’s injury may force Boston to hold onto Rajon Rondo at least until Smart comes back. Rondo is playing with great efficiency, and he is averaging an almost unheard of eight rebounds per game as well as 12 assists (both lead the league for point guards).

23. Pistons (3-7, up 2) It is not like we haven’t witnessed this the past couple years. The Pistons are still one of the weakest teams when it comes to closing out games (29th in 4th quarter scoring) with no clue what their best five-man group is in crunch time.

22. Knicks (3-8, down 1) It is looking very much like New York is going to be a borderline playoff team again, competing for one of those last seeds in the East. The Knicks dropped home games to Atlanta, Orlando and Utah in the past week. Anthony’s 47-point effort fell just short as Trey Burke rose to the occasion at the Garden.

21. Bucks (5-5, up 2) This team is clearly capable of doing more damage than it did last year. Brandon Knight has really impressed me running the offense (18.3 pts, 6.4 ast) and stepping up in big moments by hitting multiple clutch shots this season.

20. Thunder (3-8, down 2) Reggie Jackson has taken responsibility of running the show without K.D. and Russ. He’s averaging 21.5 points and 7.6 assists while shooting over 85 percent from the charity stripe. Jeremy Lamb, a decent defender and a streaky shooter, continues to slowly progress but could be doing better (12.2 pts, 39.7 FG%, 29.6 3P%)

19. Jazz (4-7, up 3) Utah has impressed with a brand spanking new confidence from behind the arc under coach Quin Snyder. Derrick Favors has blossomed into a consistent bruiser down-low. On top of that, Gordon Hayward and Alec Burks are doing a great job rotating and cutting off passing lanes, as the team is ranked first in opponent FGM/assist ratio.

18. Nets (4-5, down 1) The good news: Deron Williams says he feels much better now and even goes so far to say nobody can guard him. The bad news: there are so many other high-caliber point guards in this league, and there is a dearth of proof Williams can keep up this performance, night after night against such a deep crop of point guards without breaking down.

17. Hornets (4-6, down 1) First off, I would like to say the Hornets are better than a .400 team; their record is mostly evidence of their recent West Coast road trip where they lost three of four. I was actually in attendance for that one impressive win in Phoenix. Steve Clifford’s team lives and dies by defensive effort. Clifford continues to build up a good reputation for himself across the league.

16. Hawks (5-4, up 3) The Hawks are in a position I call “no man’s land.” They will likely compete for one of the last four playoff spots in the East, but I ultimately think it will be extremely tough for them to win a playoff series. Paul Millsap appears to have taken over the leading scorer duty, but that could change to Horford or Teague at anytime, especially if Horford recovers his complete arsenal after missing all of last season.

15. Heat (5-5, down 12) A 12-spot decline? You sure? Oh, I’m sure. Miami has lost its last two games with Wade out of the lineup — the underlying subplot of its entire season. I am sure that had an impact on Chris Bosh’s horrendous 2-of-17 shooting performance in a home loss to Milwaukee. The Heat need to get it together, and it needs to happen in the near future.

14. Suns (5-5, up 1) Phoenix has itself a couple exciting rivalries in competing for the playoffs. Last year, it was Dallas and Memphis who just scratched out playoff spots ahead of the Suns. Now the Pelicans and Kings are being added to the mix. Oh, and the Oklahoma City Thunder are likely competing for a low-seed if they are competing for anything this season. If coach Hornacek thought last season was tough, he hasn’t seen anything yet.

13. Kings (6-4, up 1) Sacramento is having one of its best starts since the early 2000s. Talent was not a problem for the Kings before — it was to get the chemistry clicking, get some veteran leadership (which it now has in the freshly extended Rudy Gay) and improve their post defense. Despite being written off as an efficient starter and gradually losing respect since being traded from Memphis, Gay is silencing out his critics (22.5 pts, 6.8 reb, 88 FT%) and forming one heck of a duo with Boogie Cousins.

12. Pelicans (5-3, up 1) The only player in the NBA to score 25 points and collect ten rebounds and five blocks in a single game this season? Anthony Davis, who has done it three times.

11. Wizards (7-2, even) Washington’s record does not necessarily correlate to its strength in the Eastern Conference. The Wiz have a handful of easy wins, the best ones being over New York and Milwaukee. John Wall is averaging 9.1 assists but ranks 20th in AST/TO ratio.

10. Bulls (7-3, up 2) The 7-3 Bulls look motivated and energized on offense. Jimmy Butler’s offensive growth is a big reason the Bulls aren’t just a defensive threat. Butler is averaging an impressive 21 points and six rebounds on 53 percent shooting.

9. Cavaliers (5-3, up 1) Again, it is just so early to judge them. The Cavs are definitely in better shape than teams above them. They are still figuring things out. Irving, James and Love are all on one mission but that does not go without bumps on the road. James started his first year in Miami with a 7-8 record. He will make the situation play out the right way, and has already started: he has averaged 35 points in Cleveland’s past three wins.

8. Clippers (5-3, down 2) Chris Paul and Blake Griffin making the All-Star team and generating dozens 0f highlight plays is a given. But everyone is going to judge this team, and Paul particularly, on if they make the Conference Finals. So far, against top competition, they have had a mixed bag of results. They defeated Portland, 106-102, but lost to Golden State by double-digits and managed just 85 points against San Antonio.

7. Mavericks (7-3, up 2) Rick Carlisle and the Mavs beat the 76ers by 53 points. _Woah. _I know, right? Nowitzki needed just eight attempts, hitting seven of them, and the Mavs were +33 with him on the floor. He and this team, tops in the NBA in OffRtg, are playing inspired, efficient basketball. Monta Ellis, a move that has paid off in a huge way for them, is scoring 29.7 points per 100 possessions.

6. Spurs (5-4, up 2) Coach Popovich loves to play with our minds. He fearlessly proclaims Duncan and Ginobili will be held out for rest. Wait a second… no fine this time? Good, I support that because it is his job to make coaching decisions for the best of this franchise. Star defensive player, and almost at that level offensively, Kawhi Leonard is averaging 15 points, seven rebounds and 1.9 steals over the past two weeks. I believe Leonard deserves close to a max deal in today’s market.

5. Raptors (8-2, even) At this time, the Raptors are my only Eastern Conference team competing with the best of the West. It is easy to tell Toronto is a well-coached team with its great ball movement and top-notch defensive effort. Brilliant guard-play from Kyle Lowry (18.4 pts, 5.7 ast, 5.3 reb) and DeMar DeRozan (31.8 points per 100 possessions) has awakened the rest of the NBA.

4. Rockets (9-1, down 2) The Rockets would likely be 8-2 if not for Brett Brown kicking the basketball (see above). Miami and San Antonio (without Duncan and Ginobili) remain Houston’s most impressive wins. They have wins over LAL, UTA, BOS, PHI (twice), MIN, OKC.

These two West contenders are playing in a matter of hours in two of tonight’s biggest games: New Orleans at Portland, Houston at Memphis. We’re going to be asking ourselves all season if the non-Spurs contenders — Clippers, Trail Blazers, Grizzlies, Rockets, Mavericks — are great enough to win multiple playoff series this spring. If Portland and Memphis, respectively, secure impressive early-season wins tonight, it will go along way for their case.

Of course, Oklahoma City, however banged up, has proven it can make a run to the Finals. If they ever get healthy, they will be in the mix no matter what their seed is. So wait… What team am I forgetting in the West? Who has a chance to play spoiler and make a run at a championship season?