Because of hockey’s low-scoring, high-variance nature, each NHL season features a few teams far above or below where we thought we’d see them in the standings, especially early in the year. This can be due to luck, injuries, slumps, mumps, emergence of young players or anything, really. Hockey’s a strange game.

Because we’re just over one-third of the way through the season, there is still time for some of these teams to fall off or make a playoff run, but each passing day makes large leaps and falls in the standings less likely. It all comes down to whether or not what causes the winning or losing is sustainable. Therefore, it’s easier to approach this on a case-by-case basis.

Edmonton: The Oilers probably weren’t going to make the playoffs this year and we knew that. But the offseason acquisitions of Mark Fayne, Benoit Pouliot and Nikita Nikitin along with the arrival of first-round pick Leon Draisaitl, the possible emergence of Nail Yakupov, the possible arrival of former first rounder Darnell Nurse, the prayer that Ben Scrivens and Victor Fasth would be an improvement in net and the continuing development of Taylor Hall and Ryan Nugent-Hopkins made it seem as though they would at least compete in the Western Conference.

Nah. Nearly a decade into the rebuilding process and we’re not any closer to seeing Edmonton field anything resembling a competent hockey team. They’ve won just seven games and have earned just 20 points, good for last overall in the Western Conference. The interesting twist this year is that the Oilers are actually a mediocre possession team (50.1 corsi percentage at even strength in close-game situations). It’s goaltending, defensive lapses and some poor shooting luck that have done them in (along with a complete in ability to draft outside of the first round).

Scrivens and Fasth haven’t been an improvement in net at all, sitting at 40th and 41st in the league in save percentage, respectively. The team doesn’t have a second-line center, none of the team’s three former first overall picks have exactly set the World on fire.

They’re essentially what the Cavs were in the NBA until LeBron returned: a bumbling heap of incompetence, relying totally on nabbing top-five picks and completely failing to draft anyone good enough to really move the needle. But there’s no superstar returning home to save them, just the hope for positive regression and some better performances out of the goaltenders.

Calgary: Staying in Alberta, let’s go with the ironically-named Flames. This would have been far more fun to do two weeks ago. The Flames, who were picked by nearly every analyst, media member and fan to finish near last in the league. Many Sabres fans were terrified to see Calgary’s opening-night lineup; it looked bad enough to challenge for last overall (and the subsequent best odds on phenom Connor McDavid).

But then Calgary started winning. And kept winning. Until about two weeks ago, that is. On Dec. 4, they defeated Colorado to move to 17-8-4. But negative regression seemed imminent. The team had poor possession numbers, some unsustainably-high shooting percentages and didn’t exactly have the special teams, goaltending chops or skill players to counter a lack of possession.

Calgary has not won since defeating Colorado, going 0-6 while scoring just 10 goals. They’re starting to look like the team they were expected to be before the season as they fall further out of contention. Yet, the Flames are 17 points out of last place. It’s not as if a tumble all the way to 30th place is imminent.

Plus, they’re better than they were given credit for. Jonas Hiller isn’t a great goalie, but he’s been a solid addition. The defensive pairing of Mark Giordano and T.J. Brodie is among the best in the league. Sean Monahan and Johnny Gaudreau have played well enough to get fans excited about the future.

This is not one of the three or four worst teams in hockey. However, Brian Burke and co. made enough ill-advised signings in the offseason to ensure this is also not a playoff team. Instead of filling holes or addressing needs, the team signed mostly useless “grit” guys like Deryk Engelland and Brandon Bollig while retaining Brian McGrattan. The trio has combined for a wholly unsurprising zero goals in 62 games this year.

Come playoff time, Calgary will likely be on the outside looking in. The same can likely be said about drafting in the top five. But, with a quality offseason, Calgary can begin to think about competing for the playoffs next year. Especially with Sam Bennett lurking. 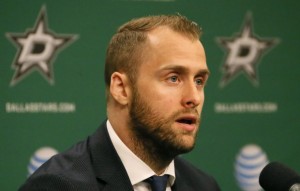 Dallas: After breaking a five-year playoff drought by qualifying for the postseason last year, Stars GM Jim Nill went all-in this summer to make sure Dallas could compete with the loaded Western Conference. The team added Jason Spezza and Ales Hemsky to an already potent offensive attack.

The Stars still seemed thin on defense and were relying on the clearly incompetent Anders Lindback to back up Kari Lehtonen in net, but the offense had the potential to be the best in the league. The Stars are tied for last in the Central Division, nine points out of a playoff spot. Tyler Seguin has emerged as a legitimate MVP candidate (great trade, Boston!), but the rest of the forward crop has disappointed statistically thus far.

Jamie Benn has only eight goals, but his shooting percentage (nine percent) is well before his career average. Last year’s first round pick Valeri Nichushkin has played just four games this year due to injury issues. Ales Hemsky has been a complete and total bust thus far, recording just eight points.

Meanwhile, Lehtonen is suffering through the worst season of his career (.901 save percentage) likely at least partially due to the incredible volume of shots he’s facing. Dallas is a flawed, but talented team. They won’t be in last in the Central all year, but they might be too far out of the playoff race to make a push, barring a miraculous run.

Elsewhere in the NHL, the Sabres have been one of the more surprising teams of the past few weeks. Before falling to the Jets Tuesday, they had won 10 of 13 games. This after winning just three of their first 18 games. The streak had/has a few wondering whether the Sabres could compete for the postseason this year. After such a horrible start, that certainly seems unlikely for a few reasons.

For starters, the play has improved over the past few weeks, but not enough to make them one of the better teams in the Eastern Conference. Playing Nikita Zadorov and Brian Flynn more has worked out well, Jhonas Enroth looks great in net and putting Zemgus Girgensons, Tyler Ennis and Matt Moulson back on a line together has worked out well.

But there is still no All-Star-level talent (no matter how many millions of All Star Game votes Girgensons gets) and plenty of guys who shouldn’t be playing a prominent role in the NHL, a deadly combination.

Andre Benoit, Andrej Meszaros, Torrey Mitchell, Tyson Strachan, Mike Weber, Pat Kaleta, Cody McCormick and Chris Stewart have all played prominent minutes this year. Outside of the first line, there’s not much (any?) offensive talent and there’s a few guys that seem to be floating around without a role (Cody Hodgson and Drew Stafford).

Additionally, the Sabres were outshot in seven of the 10 wins during that streak and won the final eight by exactly one goal. During the stretch Enroth posted a save percentage of .940, well above his career average. The team’s possession numbers remain terrible (save for a two-game stretch where they out-possessed Ottawa and Florida). The Sabres have played slightly better over the past month, but have been infinitely luckier.

It’s tough to decide how good the Sabres will be going forward. They’re six points back of Florida and Washington who are tied for the last playoff spot. But the Panthers have three games at hand and the Captials have two. The Sabres have also played more games than Ottawa, Boston and Columbus, who are between the Sabres and that last spot. Buffalo doesn’t play again until Saturday. There’s a chance they’ll have fallen back to 28th place overall by the time they take the ice. Essentially, the Sabres are at the back end of the pack despite just coming off what will likely be the best stretch of their season.

Assuming Enroth comes back to Earth at some point and the shooting luck comes to an end, it seems likely the Sabres will be back in the McDavid conversation by early 2015. But they’re now nine points ahead of Carolina (the ‘Canes have two games in hand) and eight ahead of Edmonton. As much as Sabres fans don’t want to hear this, the team really might be headed for a 27th or 28th-place finish.

That’s all for now, enjoy the hockeying and try not to get the mumps.