Let’s get something straight — in the annals of New England Patriots playoff history, Eli Manning and the Giants pass rush are about as significant as deflated footballs are insignificant when speaking of outcomes. As members of the Indianapolis Colts will tell you, the ball had perhaps the least to do with the final score than the Patriots simply being the better team.

@NFLonFOX not a story. They could have played with soap for balls and beat us. Simply the better team. We have to continue to build! #BTM— Dwayne Allen (@Dallen83) January 21, 2015

Let’s also make this very clear: this is not an issue on the scale of Ray Rice or Adrian Peterson. But that doesn’t mean it’s not significant. The integrity of the game has been called into question once again, and for the second time by two of the greatest to ever play and coach at their respective positions. It’s not a coincidence, and there’s no way the Patriots were unaware that 11 of their 12 footballs were under-inflated. So what now?

Well Belichick took his deadpan approach to the next level, so far as to defer the focus of the hungry media from himself… to his star quarterback.

“Tom’s personal preferences on his footballs are something that he can talk about in much better detail and information than I could possibly provide,” Belichick said. “I can tell you that in my entire coaching career, I have never talked to any player, staff member, about football air pressure. That is not a subject that I have ever brought up.”

Understandably, Brady didn’t handle this all that well, but Tom took it to another level when he tried to calm the national storm by contrasting Deflategate and an international terrorist organization. 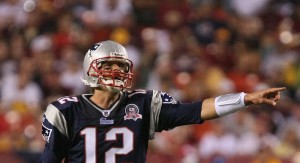 We get that Tom. No one is putting this latest infraction anywhere near that level. The heated frenzy that has ensued is one of disbelief; how can the Patriots be caught twice with their hand in the cookie jar?

When it’s all said and done, I don’t think there’s an argument that can shoot holes in the supreme talent that Brady and Belichick used to dominate the NFL for a decade and a half. The mistake that will be made in all of this are the fans and media members that will dismiss the success of the duo and chalk it entirely up to cheating. Don’t kid yourselves — that resume cannot be assembled with anything less than elite skills and savvy.

With that said, the asterisk that had gathered dust and cobwebs from 2007 has been freshly dusted off from the hot air spewed out of Foxboro this past week. Both Belichick and Brady deny any knowledge or involvement. Nope. That just can’t be true. Belichick is lord of all he sees on the football field and ask any Patriots player who’s made a mistake in this century — nothing escapes Bill in the film room.

Aside his center, no one touches the football more than Tom Brady on any given Sunday. As Nancy Armour noted for USA Today, Brady went out of his way to point out his exact preferences with regard to the weight of the ball (a PSI of 12.5) shortly after saying he doesn’t focus on the air pressure in the ball. Something doesn’t add up.

The next step is to try and split the the hairs of this investigation and figure out something definitive before Super Sunday. Nothing will resonate more with the Patriots than if Tom Brady or Bill Belichick are absent from the sidelines on February 1. Do I think this will happen? No. Too much has to still happen with the investigation and disciplinary issues in the NFL rarely resolve themselves in two weeks.

No, it’s much more likely the NFL fines Belichick and the Patriots and takes away draft picks. The Pats were fined $250,000 and a stripped of a first round pick while Belichick was docked a record $500,000 back in 2007. Culpability must be established for individuals to be disciplined, but if done so definitively suspensions could be next. Will it be enough? This becomes the ultimate question as it’s pretty apparent the message didn’t hit home the first time around.

Here’s a genius idea as the NFL battles negative headlines yet again in the 2014-2015 campaign: remove any and all power from competing teams in the handling of game balls. It’s not rocket science, in fact, it’s almost mind-numbing that the league is so trusting of teams to toe the line.

The worst part of all, as ESPN Boston reporter Jackie MacMullan wrote, this whole scenario was entirely avoidable. Paranoia and obsession drove the Pats to break the rules again, not necessity or lack of talent. As MacMullan and others have pointed out, the competitive nature of Brady, Belichick and the culture of the Patriots has brought them greatness but also great scrutiny, and in the end, it’s a damn shame one will never live without the other.