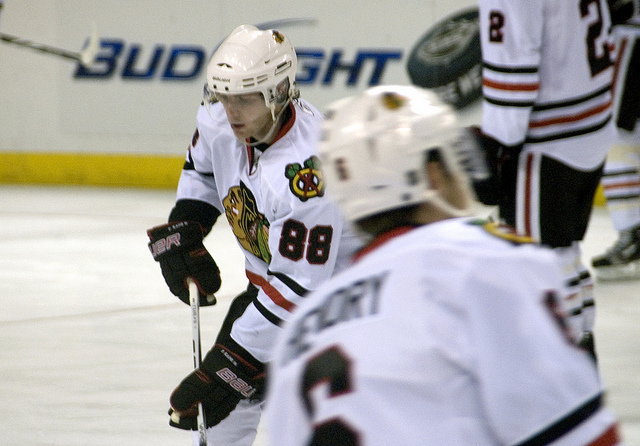 Whether or not you reside in the greater Chicago area, it’s hard not to feel bad about what happened last night. Derrick Rose’s career took yet another unfortunate turn and the Blackhawks lost star forward Patrick Kane for 12 weeks, which is likely the rest of the season for them. This throws a major wrench in what could have been a fun dual championship run in the Windy City this spring. (Both runs, in addition to possible early turnarounds for the White Sox and Cubs, could have made for one of the great all-time sporting moods for a city.) But both injuries carry implications that cut deeper than either team’s immediate championship chances (and not just because both players could theoretically make it back for the playoffs this year).

Starting with Kane, the Blackhawks lost the NHL’s leading scorer. Obviously, that hurts. Kane’s hands are the stuff of legend, but focusing on that overshadows his vision and hockey smarts. He’s one of the most dynamic offensive forces in hockey, the key to Chicago’s scoring line. The Jonathan Toews/Marian Hossa/Brandon Saad line is still one of the best possession lines in hockey, but losing Kane hurts a lot. The Blackhawks won’t drop out of the playoff race or anything, but they’ll have a hell of a time getting past the Blues in the first round if Kane isn’t ready by then.

And that’s a problem. Because this is Chicago’s last run before salary cap issues make GM Stan Bowman’s job even harder than it’s been in the past. Kane and Toews’ extensions both kick in next season, meaning Chicago will owe the duo more than $27 million combined next season. Additionally, Hossa, Patrick Sharp, Brian Bickell and Kris Versteeg will command more than $22 million next season. That’s roughly $50 million on six forwards. Throw in another $19 million for Corey Crawford, Duncan Keith and Brent Seabrook and you’re just under $70 million. Without context, that doesn’t sound so bad.

Here’s your context: Commissioner Gary Bettman said in December that he projects the salary cap to be about $73 million next season. That’s not set in stone, it’s a projection. That’s still a major problem. It might fluctuate to $74 or $75 million, but that still doesn’t give the Blackhawks much breathing room.

Chicago underwent a major salary cap purge after winning it all in 2010. The following two seasons ended with eighth- and sixth-place finishes in the West, respectively, and first round playoff exits. This despite the team possessing four young superstars.

A purge of some kind is coming again this summer. Chicago already traded defensemen Nick Leddy before this season to avoid cap issues. I won’t speculate exactly what the Blackhawks will do just yet (that’s likely for another post) but it likely ends the same way. They’ll become a top-heavy team that struggles with depth, much like Pittsburgh has been the past few years.

Much of this is probably talk for the offseason, but it all goes to show how important this year is for Chicago. It could be the Hawks best chance to win it all.

From another angle, the NHL’s leading scorer (now tied with Jake Voracek and Nick Backstrom) going down gives us an opportunity to discuss the NHL’s anemic scoring rate for top players. Last year, only a superhuman effort by Sidney Crosby prevented the NHL from not having a 90-point guy (he had 104 while second-place Ryan Getzlaf finished with 87).

This year, no one is on pace for 90 points. The last full season where no one scored 90 points was 1967-68, when Stan Mikita led with 87. While it’s no secret top players don’t score at the rate they did in the ‘80’s, a drop like this is pretty jarring.

For a variety of reasons, scoring jumped from 2005 to 2007, especially for top players. But 2007 to 2011 featured 11 100-point seasons (including four 110-point seasons). The lockout season obviously featured none, and the past two years will likely have just one. It would take a deeper dive than this to figure out the roots of this issue/whether or not this is just a blip, but suffice it to say losing one of the league’s only elite scorers is bad for fans of fun hockey as it is for Blackhawks fans.

I’m not sure what this means for Chicago’s championship chances. It was difficult to see them beating Atlanta or Cleveland in the playoffs, much less Golden State or Memphis. Losing Rose definitely hurts the team’s ceiling, though. Not because he’s been great (he hasn’t), but because Aaron Brooks is likely the starting point guard now. Maybe Jimmy Butler will thrive in an increased role on offense. We’ll see.

Full disclosure: I’m a Bulls fan. I became a fan because of Rose. Before high school, I was never as much a fan of the NBA as the other three major sports. I always paid a moderate amount of attention, but it never mattered to me like the other sports did. Rose changed that almost single-handedly.

It’s easy to forget now, but Rose was once one of the most exciting athletes in the world. As a rookie, he gave the defending NBA champion Boston Celtics (sans Kevin Garnett, to be fair) all they could handle, pushing a first-round series to seven games. In his third season, he won MVP. IN HIS THIRD SEASON. Yeah, I’m well aware he didn’t deserve it. But he was so goddamn good.

He got to rim at ease, from places and in ways that point guards never do. He was fearless and consistently aggressive. He was awesome. When everyone was begging LeBron to come to their teams in the summer of 2010, he did no such thing. He was old school and new school, quiet and confident, ready for the big moments but cognizant of his humble beginnings.

Those three seasons were all we’ll ever get of Rose at his apex in all likelihood. Sometimes, life sucks.