The regular season is winding down as we enter the final month. As we ride out the final four weeks or so, fans, media types and lowly bloggers start discussing which players deserve which awards. While some awards, such as the Hart and Norris trophies, are highly-regarded and historically important, others are easily forgotten about.

The President’s Trophy falls into the latter category. The award is annually given to the team that finishes the regular season with the most points. While finishing first in the NHL is quite an accomplishment, I’m not sure any team’s ever taken pride in winning the President’s Trophy. Players, coaches, owners and fans want to win the Stanley Cup.

Unlike the Hart trophy, no one remembers who wins the President’s Trophy unless they hilariously lose in the first round (which happens more than you think). Of course, there’s nothing wrong with celebrating a good regular season so long as you go on to win the Stanley Cup afterwards. Thing is, that’s happened exactly twice in the past 11 years. In fact, you’re more likely to lose in the first round than win the Cup, if the last decade is any indication.

So, I get that it isn’t very important or prestigious. But it’s still an award. Someone will win it and a banner will hang in that team’s arena. Whether that banner will serve as a point of pride or a reminder of heartbreak remains to be seen. And that’s not all that is unclear about this season’s President’s Trophy.

For a while, it seemed like Nashville had the trophy locked up. Then a six-game losing streak hit and now it’s a free-for-all. Nine teams have a realistic shot at finishing first. So, who’s actually going to take home hockey’s emptiest award when it’s all settled?

Why they should win it: The Red Wings combine some of the league’s best possession numbers with high-end skill. The Wings are a blend of youth and experience – featuring future Hall of Famers like Henrik Zetterberg and Pavel Datsyuk along with up-and-comers like Gustav Nyquist and Tomas Tatar. The Wings are also among league leaders in suppressing opponent chances and now have a healthy Jimmy Howard.

Why they shouldn’t win it: The Wings have a bit of ground to make up on A LOT of teams. That’s the biggest issue. They’re very good but so is everyone else vying for first place.

Verdict: The Wings will need quite a streak to win their record-extending seventh President’s Trophy.

Why they should win it: With Sidney Crosby and Evgeni Malkin centering the top two lines, the Penguins have as dangerous a top-six as anyone in the NHL.

Why they shouldn’t win it: About those other six forwards… Pittsburgh doesn’t exactly have quality depth players. That, along with the continued presence of Rob Scuderi, will keep Pittsburgh from this trophy, a division title and a Stanley Cup.

Verdict: Considering they have ground to make up and teams to pass, probably not.

Why they should win it: Tampa has an unbelievable top-six, a solid defense one-through-six and some of the league’s best possession numbers. The Kucherov/Johnson/Palat line is one of the more underrated units in the league. Steven Stamkos is a legit superstar.

Why they shouldn’t win it: Goalie Ben Bishop has been merely average this year after a fantastic 2013-14 season.

Verdict: The Lightning are good enough to win the President’s Trophy this year and compete for it every year for the next decade. 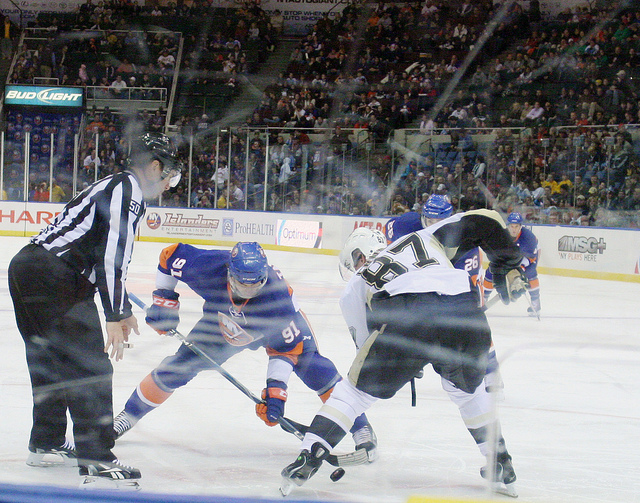 Why they should win it: The Islanders have four solid lines, an MVP candidate in John Tavares and a good blue line. The scoring is balanced as the 10th and second leading point getters are only 15 points apart.

Why they shouldn’t win it: Goalie Jaroslav Halak has been below-average this year while his backups have been awful. However, the Isles acquired the solidly-mediocre Michal Neuvirth at the deadline as insurance for Halak.

Verdict: If Halak can play the way he has for most of his career, the Isles would be in good shape. But, with 69 games already in the bank and ground still to be made up, it doesn’t seem like a President’s Trophy is in the cards this year.

Why they should win it: Always a solid defensive and possession team, the Blues have more of a scoring touch now that Vlad Tarasenko’s career has taken off.

Why they shouldn’t win it: Like some of the aforementioned teams, St. Louis has some iffy goaltending. Brian Elliot has been solid overall, but has had some bad stretches. Jake Allen has been terrible.

Verdict: The Blues will be in this race til the end, but are likely more concerned with locking up the Central Division title.

Why they should win: Talent. With the deadline acquisitions of Simon Despres and James Wisniewski, Anaheim shored up the blueline of a team that already has the Pacific Division wrapped up for all intents and purposes.

Why they shouldn’t win: Goaltending is still inexperienced. Eventually, they won’t be able to win e_very_ one-goal game.

Verdict: They’re as likely to walk away with the President’s Trophy as anyone. The Stanley Cup might be a different story.

Why they should win: Pekka Rinne is great, a fantastic young defensive nucleus is forming and some low-key offseason acquisitions (Mike Ribeiro, James Neal) have paid off so far. Oh, and Filip Forsberg is having quite the rookie year.

Why they shouldn’t win: The reason I can think of is that other very good teams are also vying for first place. That makes it harder.

Verdict: This recent skid aside, Nashville is a complete and well-put-together team. They’ll be right in it to the end.

Why they should win: Carey Price, sporting a .937 save percentage, is the league’s MVP thus far.

Why they shouldn’t win: Basically everything else. They’re poorly coached, have poor defensive depth and have below-average possession numbers. Aside from stellar goaltending, they’re not very good. They showed as much when Carey Price was injured in the Eastern Conference Finals last year, forcing Dustin Tokarski to start.

Verdict: The good news for the Habs is they get to use Carey Price for the rest of the season. That puts them right in President’s Trophy territory.

Why they should win: After a slow start to the season, the Rangers are 31-7-4 in the past 42 games. Rick Nash is having a career year, Martin St. Louis seems ageless and Keith Yandle is as strong an addition as there was at the deadline. Henrik Lundqvist has been hurt and it hasn’t even mattered. Cam Talbot has matched his season save percentage at .922.

Why they shouldn’t win: The Rangers league-leading 101.9 PDO after even strength in close games indicates they could slow down at some point.

Verdict: With eight games remaining against Buffalo, Carolina, New Jersey and Columbus, the Rangers should be favorites to win the President’s Trophy.