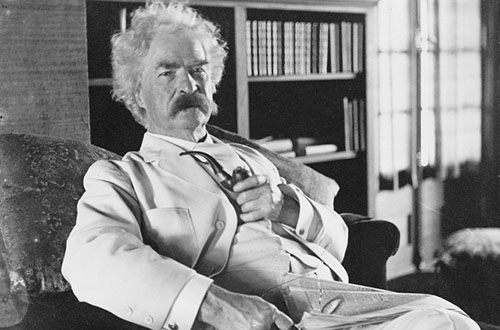 Last week was my first week as a substitute teacher. I worked three days in a high school: Monday, Wednesday and Friday. The students in the last period class on Friday were reading Mark Twain’s The Adventures of Huckleberry Finn. The lesson plans for the period were simple, only to hand out a pair of packets. One of them was a reading packet including a brief biography of Mark Twain, as well as a background of the socio-historical context of America at the time of Twain’s writing.  The other packet was a two-page Huckleberry Finn character graph-diagram that was to be filled out after the students had finished reading the former packet.

In the brief time that I have been subbing I have already detected a consistent collective desire for chaos in the psyches of the students. Well, I am exaggerating. Chaos might be a little too harsh. But regardless if high school students are active anarchists or not, I have found in them a firm and constant resistance against productive order.

To combat their desire for idle talk, and their desire to shout out sly remarks that are not as witty as they’d think — typically their commentary centers around my shirts and the futile semblance of a beard that I wear for self-confidence — I prepare for each lesson by reading what they will be assigned. And so last Friday, in anticipation of the final class of the day, I read the packet that was going to be assigned.

“The story most people like to believe is that it came from one of the happiest times in his life, when he was working on the Mississippi River. There he would have seen pilots sounding out the depth of the river using a weighted rope marked along its length at regular intervals. As the rope touched the bottom, the pilot would call out the mark to which the water level had reached. Mark Twain was the second mark on the rope, meaning that the river was 12 feet deep at that point.”

“He [Samuel Clemens] spent much of his childhood moving from place to place as his father attempted, not very successfully, to make a living.”

The reason that the young Samuel Clemens moved from place to place is because his father struggled to find regular and sufficient work. However, a student reading this sentence needs to reason this conclusion out of the intentionally vague language that is being used; many said students are not trained with this type of sensitivity to diction and syntax — many of them more than probably can not provide a definition for diction and syntax.

If it seems that I am being harsh, it is because the reality of the American education system has necessitated my honesty. The sentence quoted above buries the cause of the vagabond existence of the Clemens family. It takes the subject of the sentence and presents it as a clause. In this way, Samuel Clemens’s childhood struggle is downplayed. Therefore, the reality of his conditions as a human being during his life are misrepresented and mythologized.

I talked in my last article about the process of the dehumanization of Native Americans. This effect of history was presented to me by the film Reel Injun, which is about the misrepresentation and dehumanization of Native Americans by American cinema. I ended my last article with the radical proposition that all people who are dehumanized by the dominant culture are Native American. What I mean to say is that the process of dehumanization of people by the dominant culture, or the ruling class (I’m honestly not sure which), share the experience of a similar injustice. Mark Twain is Native American as a result of how he is represented in his biography in the reading packet that I was given to assign. His childhood is used as a symbol of American folklore, rather than as an honest examination of the poverty that he endured at that time in his life.

The folksy, lighthearted tone that was used to write about Mark Twain carries over to the background of the socio-historical context of America at the time of Twain’s writing. If not for the subtitle on the top of the third page of the packet, a reader might not realize that she was reading about slavery. Consider the opening paragraph of the section:

“When Europeans first settled in America and the West Indies in the seventeenth century, they set up huge farms and plantations where they could grow crops to be sold back in Europe. There was a lot more land than there were people to work on it, and so the colonists bought Black slaves from Africa.”

This paragraph is an atrocity. It provides us with a spacial-logical explanation for why slavery was acceptable. Following the logic that is supported by the last sentence of the paragraph, it seems that anyone, even in our present day, who might have “a lot more land” in their backyard than there are family members to mow and rake it, might want to think about buying a Black slave from Africa to help keep up with it — after all, land and people ought’a be kept in direct proportion to each other. My god, them Europeans needed them black slaves or else the ratio of square feet to feet per calf muscles would be out of whack — never mind whether or not said feet had suffered a few broken toes, or were bleeding, or maybe didn’t even have no more blood running through ‘em.

There is also a capitalist logic at work in this paragraph and it is given as assumed justification for slavery. The Europeans had come to America and the West Indies to farm and sell what they produced back to Europe. In order to do this they had to buy Black slaves. Black slaves is the capitalist dehumanized signifier for Black people.

Using it to talk about slavery in the 21st century should not be tolerated. But this packet, and others like it, are what is being used in American educational (cinema?) to teach students about slavery. It is an atrocity because “Slavery was an atrocity” should have been the first sentence of the section. It should not be assumed that we all know that slavery was an atrocity, it should be reinforced every time we talk about it.

As I close, I will posit that the reason we do not reinforce slavery was an atrocity every time we talk about it is because we, as a culture, have moved far away from the reality of our individual and collective existence. The referent “Americans” is never actually used in the text. No, the text would have us believe that there were only Europeans in America at the time of slavery. The American cavalry of moral consciousness does not assert itself in the text until the transition to the Civil War.