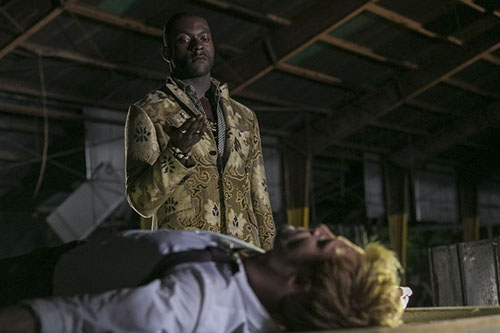 When you’re given instructions not to do something, what’s the next logical step? For most it would be to not do the said thing — but, hey, everybody is different. Curiosity has been known to treat felines abhorrently from time to time, and in this week’s episode of Constantine, “The Devils Vinyl,” there are no shortage of deceased creatures.

The curiosity of man getting in the way of logic, and ultimately man’s survival, is the central idea that Constantine uses in its latest episode. To be frank, it’s a common trope — to its credit, not as despicable as filthy dude-bros, though — but is captivity nonetheless. Weaving in some classic American myths and a penchant for travel, Constantine puts together another mystery worth solving and keeps adding to the mysteries we haven’t solved yet — including our anti-heroine Zedd.

The episode opens with the retrieval of a record called the “Acetate” with a song by blues singer Willie Cole by an undisclosed woman. The record is said to have the voice of the devil on it and will result in the death or in the violent insanity of all who listen to it or touch it. (Isn’t the real life myth behind Robin Thicke’s hot mess, Paula?) After raising his recently deceased friend and former producer Bernie from the dead to gain details on the record, John is led to Marcus Mooney, its true owner. After a well-done flashback scene, which implies old Willy sold his soul to the devil, we’re introduced to an old friend: the angel Manny.

There really isn’t a character that can make an entrance like Manny — although his divine status gives him a leg up over commonplace mortal entrances — but the dude understands drama. Just before Mooney dies he gives John and Zedd another piece to the puzzle — the record was sold to someone with the last name Fell.

Luckily for John, he knows exactly who Fell is: Ian Fell, his old friend and who also collaborated with Bernie. After a brief confrontation it’s revealed Ian Fell knew nothing about the Acetate, his wife Jasmine Fell did. After Ian contracted cancer and fell on hard times Jasmine was coerced by a sleazy soul broker to sell her soul to save Ian in exchange for the Acetate.

The soul broker Anton wasn’t exactly pulling all the strings himself, the real culprit behind all this was Papa Midnite. Papa is a truly interesting character. He’s got his own motivations and like Constantine he’s a mix between resourcefulness and dabbler, well you’d have to call Papa Midnite a master of the dark arts. His soul is damned as well and he sees the Acetate as his way out.

Unfortunately, for every great man there are his two overly violent and incompetent goons to speak for. These two goons raise the stakes after being possessed by the Acetate and decide to broadcast the demonic recording at a local club and even worse, a university radio station.

Ironically, Papa Midnite ends up saving John and most of the area actually. Before Papa Midnite can claim the Acetate to save his soul John sends the recording back to where it belongs, hell.

This episode is pretty significant for Constantine. Besides introducing Papa Midnite whom will be a wild card character moving forward in the season, we’ve found out more about Zedd. It’s clear John doesn’t trust Zedd but as he said in the episode, he does what it takes. Moving forward John and Zedd’s relationship is going to keep being a combination of them using each other and doing their best to find out what the other is truly up to. The epsidoes ends with two ominous scenes: Zedd growing tense as she takes off a strange necklace and Papa Midnite burning a John Constantine voodoo doll. The stakes are being raised every episode but if we’re not given a reason to sit up in our seats Constantine may fall in a repetitive lull.