It was announced toward the end of 2014 that Jared Leto will play the Joker in the upcoming D.C. comics based movie Suicide Squad, which is set to open on August 5, 2016.

After the completion of Christopher Nolan’s Batman trilogy, I thought for sure that the caped crusader would take a hiatus from the film screen, at least for a couple of years. I imagined the next generation of American film viewers would know Batman by Nolan’s films; to grow up with Nolan’s hero by watching marathons of his superhero masterpiece on AMC.

So when I heard that Ben Affleck would be portraying the Dark Knight in 2016, I was shocked, and I thought that it was far too soon.

The fact that the Joker character has been re-casted perhaps adds a new axiom to the “too soon” argument concerning another Batman movie and series. After all, it is a fact that Heath Ledger knocked it out of the park with his portrayal of the Joker; even the Academy Awards, which all-too-often loses its head inside of its ass when it comes to extraordinary genre films, granted Ledger’s performance the Best Supporting Actor award. (Whether or not they would have acknowledged the performance if Ledger hadn’t died, of course, is a whole other conversation.) And it has been proposed by many YouTube chefs and connoisseurs that Ledger’s commitment to his role of the Joker lead to his death by suicide, overdose, a combination of the two or otherwise. 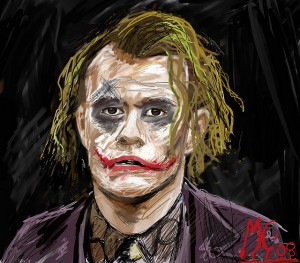 The Joker. (Photo provided by johnantoni))[/caption]

The reason that this argument does not hold up is because the American culture and Hollywood do not operate under anything that resembles an ideal respect. We always had the sense that the people in Hollywood are debasing people, and now, through the e-mails leaked by the hacks on SONY, we have certainty that this is indeed the case. What I just said is harsh and a generalization, so I want you to take it for what it is: the respect necessary to enforce the “too soon” argument as a realistic argument does not exist in Hollywood. Neither does this type of respect exist in American culture. We are a nation of addicts, constantly anticipating and demanding the “next big thing.” (Or the next nude photo scandal from our beloved entertainers.) We do not have time to place flowers beneath the epitaphs of our past entertainers. We are going, going, gone on to Expendables 3, 4, 5, ad infinitum. A reliance on respect for the basis of our “too soon” argument is not naive at all, but it is flat out too spartan for the America we live in.

Before I move on to the argument that will, I hope, negate the “too soon” argument all together, I want to comment on what gave Heath Ledger’s Joker the power that it continues to have over our society. Ledger accomplished what is the greatest aspiration of an artist in any medium: to disappear behind his art. This goal, while not easy for any artist, is perhaps most difficult for an actor to succeed in doing. Unlike any other artist, the actor’s physical being is always one with the physical medium of his art. A painter is present within all of the frames that house his art, but she might be smoking a cigarette at a nearby cafe while an audience gathers to study her work. A writer throws her consciousness into her text, but she is not within the steam that rises from the cup of coffee on the desk beside the reader, nor is she hiding like a fly in the lampshade, from where a dim orange light rustles over each page. An actor can not disengage from her material like other artists can, except perhaps psychically. (I imagine that this psychic effort is grueling, and that it demands tenacious self-discipline).

Nolan’s Batman trilogy, especially Batman Begins _and _The Dark Knight, placed supermen in our world; their settings are familiar, the dialogue is contemporary and natural. Christian Bale’s Batman felt more real to us than did Tom Wilkinson’s crime lord Carmine Falcone, because Batman expresses our desire for justice, whereas Falcone confronted us with the too real reality that there are malevolent people in this world who kill off the best of us for greedy intentions. The argument for justice may soon fail us for the same reason that the “too soon” argument failed us. The failure of our legal system to indict the officer who strangled Eric Garner to death may be a foreboding that justice itself is too ideal of a concept for the America we live in.

Instead of the narrative that prevails in Executive speeches and in the narrative of our educational systems of “a country by the people for the people,” an Us vs. Them relationship between the American government and the American people has come to define America’s political and social reality. There is a popular mistrust of our political institutions, which has given way, in some cases, to hostility toward these institutions. Heath Ledger’s Joker is a radical champion of this mistrust and hostility, but the Joker is not a reformer: he is an anarchist and anarchy is no solution at all. Heath Ledger’s Joker, the anarchist, combined with his emergence into a world so familiar to our own, is what gives his character the power and relevance that it has over our culture. His presence anticipates the annihilation of what is familiar to us.

From what little there is to know right now about Suicide Squad, it does not seem probable that Jared Leto’s Joker will be able to invoke the same horror that Ledger’s Joker instilled in us. Leto’s Joker will be surrounded by an entourage of super-villains; it will not have the unreal distinctness that Ledger’s Joker possessed. As far as western civilization is founded on the tenants of the masculine hero, the Joker, as antithetical to civilization, embodies the effeminate contrast to masculinity. Whereas Batman, and other superheroes, are masters of order who overcome the chaos of the cosmos, the Joker surrenders to this chaos. He becomes one with it, and sets about to destroy humanity. Based on Leto’s Oscar winning performance in Dallas Buyer’s Club, Leto might choose to enhance the effeminate aspect of the Joker’s character.

Whatever choices Leto chooses to make for his portrayal of the Joker (and this brings me to my second, and final argument) the Joker character is his to represent, as much as it was Jack Nicholson’s and Heath Ledger’s; as much as it is anyone’s — actor or not — to bring into her being and to become.

To digest what I am saying, we should think about characters as symbols. Ferdinand de Saussaure divides a symbol into two parts: the signified and the signifier. He uses “tree” as his example of what is a symbol. “Tree,” like all symbols, is composed of two essential parts — what we speak or write, and the thing itself. The Joker, the character, is an empty signifier — signified by any actor or person who embodies the Joker. The “too soon” argument concerning Jared Leto portraying the Joker in 2016 is thus unjustified because Heath Ledger’s Joker was a signified for the signifier the Joker. Heath Ledger’s Joker is not the Joker; to accept Ledger’s Joker as such would be to detach the empty signifier of the Joker from its place in the stars.

The Joker was not in The Dark Knight; it was never there; but it was represented. Jared Leto has agreed to set out to talk with this thing the Joker. We await what words, and what laugh, he’ll bring back to us.