While exploring the movie shop at British Film Institute in London, I came upon the 1944 DVD of Ali Baba and the Forty Thieves. Now usually I don’t give movies from the ’40s a second glance. We don’t really get along. But the name Maria Montez caught my attention.

My mom has always badgered me about the infamous Maria Montez that she grew up with in the Dominican Republic. I had always been interested in watching her films but never found them accessible. Needless to say, Ali Baba and the Forty Thieves was the perfect film to start my January Classic Film Challenge.

Directed by Arthur Lubin, Ali Baba and the Forty Thieves is an almost comical, too-perfect example of cultural misrepresentation and appropriation — the kind of shit that old Hollywood is notorious for. You’ve got the story set in Baghdad (loosely based on the Middle Eastern folktale) yet all of the main characters are white.

Maria Montez, no matter how “exotic” Hollywood wanted her to be, was a white woman (We’ll get to her background later) and here she is playing a Middle Eastern princess, Amara, set up as decoration. Sporting a horrible tan, Jon Hall is Ali Baba, a boy prince whose father is murdered by Mongol invaders and is raised by the infamous forty thieves. As children, Ali Baba and Amara swore to each other their unconditional love but were separated by the Mongol invasion after Ali Baba’s father was killed. Now man and woman, Amara is set to marry the mighty Khan and Ali Baba is out to have revenge and rescue his love.

Khan was portrayed by Polish actor, Kurt Katch… in yellowface. Then, there’s Andy Devine, playing outspoken thief, Abdullah. Devine is supposed to provide comedic relief but comes across as childish. To top it all off, the majority of the servants and slaves in the background are distinctively black.

Are you sure we are not talking about Ridley Scott’s latest failure?

No, I know it’s all the same but stay focused: this is Ali Baba and the Forty Thieves from 1944.

To say that I was unimpressed by this movie is an understatement but it set off a week long research and discovery process into the Maria Montez in my identity, history and future.

Born in the Dominican Republic, Maria Africa Garcia Vidal de Santo Silas (Montez was added later on in Hollywood) was actually Spaniard. Dubbed the “Queen of Technicolor,” she was famous for adventure epics in which she played the Latin seductress character that haunts Latinas to this day. Adored by Dominicans, Montez is the icon of what Dominican women are supposed to be. 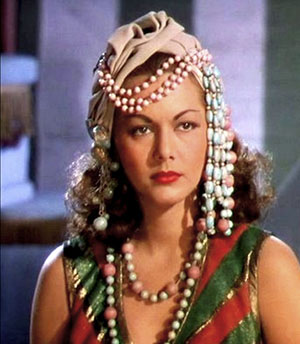 Montez’ career coincides with the regime of Dominican dictator Rafael Trujillo who ruled the island from 1930 until his assassination in 1961 (Not-So-Fun-Fact: He was trained by the U.S. Marines but so were the majority of Latin American dictators). Trujillo’s dictatorship is notorious for it’s cruelty against rebellion, intimidation tactics, racism and sexism to name a few. In short, the country experienced a constant state of human rights violations and lack of civil liberties.

Trujillo’s longest effect on Dominican culture is the creation of anti-haitianismo and anti-blackness that is still prevalent in its population. Haitian Dominican relations have always been rocky but in 1937, Trujillo ordered an attack on the border in what became known as the Parsley Massacre. Over 20,000 Haitians, including women and children living near the border, were murdered.

Why “Parsley?” It is believed that Dominican soldiers judged the Dominicaness of those living in the border based on the pronunciation of the word Perejil because Haitians who speak Creole have difficulty pronouncing the r in Spanish. Those that could not pronounce it were deemed Haitian and killed.

Although the Dominican culture views Trujillo as the monster that he was, to this day race relations in the country are tied to Trujillo’s message. It is common for Dominicans to claim Spanish ancestry and deny their black roots even when such huge parts of our culture (especially food and music) derive from West African influence. Many are blinded to the fact that any whiteness in our community is the result of the rape and genocide of African and Tainos (Arawak people of the Caribbean).

My grandparents were raised in the time of Trujillo’s assassination and the years following. Throughout my childhood they exhibited a terrifying self-hatred, anti-blackness and anti-hatianism. My grandfather in particular, a black man, striped of his identity, taught us to stay away from Haitians, and that blacks were to not be trusted.

Cue in Maria Montez, who is the embodiment of everything Trujillo ever wanted. Now I don’t know if Montez and Trujillo ever met but I don’t doubt that he was a fan. For a short period of time, Montez took over the B movies in Hollywood and even with her thick accent; she gave Dominicans this rightful image of whiteness that ignored our African and Indigenous background.

Everything about her identity was created by a) herself, in her efforts to break into Hollywood — she would allegedly walk into restaurants frequented by Hollywood executives and cause a spectacle of herself — and b) the escapist movies of the ’40s that made her the “Dominican Dynamite” and “The Caribbean Cyclone.”

Known as a pioneer of American underground cinema, Jack Smith idolized Maria Montez. His controversial film Flaming Creatures was a tribute to Montez and featured cross dresser and drag queen Mario Montez (Puerto Rican, René Rivera). Aside from having references to Maria Montez in a majority of his movies, Smith wrote “The Perfect Filmic Appositeness of Maria Montez.” Smith wrote: “She believed and there-by made the people who went to the movies believe. Those who could believe did. Those who saw the World’s Worst Actress just couldn’t and they missed the magic. Too bad – their loss.”

Those sentences explain Montez’ entire existence. She wasn’t an actress because she became — Or already was? — the character of the exotic prop; she was playing herself.

Smith continued: “Why insist upon her being an actress – why limit her? Don’t slander her beautiful womanliness that took joy in her own beauty and all beauty.”

This hit me. Montez unapologetically celebrated herself and her beauty. Maria Montez is what Hollywood does to Latinas, to women of color, to “exotic” women; glorify their bodies then label them “bad actress.” How is she any different than Marilyn Monroe? But Montez gets the bad actress stamp, while Monroe was misunderstood and genius.

Montez, a diva? Sure but confident like no other. She knew her worth (or at least pretended very well) and Hollywood caught on.

Was Smith’s obsession with Montez genuine? Or is it yet another result of the objectification of Montez?

What is a film critic?

Smith continued his essay with a whole lot of bravery:

“Maria Montez flix were particular – you went for your particular reasons – had specific feelings from them & about them, It was a peculiarly idiosyncratic experience and heartily despised by critics. Critics are writers. They like writing – and written characters. Maria Montez’s appeal was on a purely intuitive level. She was the bane of critics – that person whose effect cannot be known by words, described in words, flaunts words (her image spoke). Film critics are writers and they are hostile and uneasy in the presence of a visual phenomenon. They are most delighted by bare images that through visual barrenness call thought into play to fill the visual gap. Their bare delights are “purity and evocative.” A spectacular, flaming image – since it threatens their critic hood need to be able to write – is bad and they attack it throwing in moral extensions and hinting at idiocy in whoever is capable of visually appreciating a visual medium.”

That answers my previous question. Smith was not interested in Maria Africa Garcia Vidal de Santo Silas. It was the Hollywood falsehood, the same one that he criticized in Flaming Creatures, the creation of Maria Montez that he enjoyed. Montez, a white Dominican (a rare creature) under Smith’s scrutiny is now a symbol for marginalized women, because Smith found pleasure and inspiration in the destructive image and only the image of Latina seductress.

Because I do not enjoy the images of Montez, Smith would reconsider me a critic, a critic that likes to write and does not really enjoy the visual aspects of films. I don’t need to defend myself but given my personal and racially based bias in this essay, it is often difficult to express my dislike for successful Latinas. Can I not find their images problematic and also find pride in their success in the mean Hollywood machine? In the words of Gina Rodriguez: I can and I will.

Here is a clip of Maria Montez and Carmen Miranda, another Latina actress whose image was exploited by Hollywood, because Latinas don’t get along and fight for men (Hint: Sarcasm).