It is bad practice to attach merit to the numbers less than two weeks into any season of any sport. Particularly in the NBA, “small sample size” is an assumed prerequisite with any extreme statistic, good or bad, until early-December. In fact, making observations of any kind in any context can earn you a scolding this early; apparently, just implying that a player does not quite look like themselves is grounds to be ridiculed by a colleague.

Throughout the season, I am going to keep asking the question “What have we learned?” The key to learning anything about the NBA this early in the season, in addition to reading Zach Lowe and watching actual basketball games, is to reason what numbers line up with the eye test and what numbers seem circumstantial — if not completely ridiculous.

For instance, Cleveland — you know, the team that added LeBron James and Kevin Love over the summer; a universal top-two pick in the East; a team that also boasts Kyrie Irving and Dion Waiters — had an offensive efficiency of just 98.8 through its first four games, and had the NBA’s fourth-lowest true shooting percentage. (Those numbers have shot up since Friday’s offensive explosion against Denver.) Simply, those numbers aren’t real — they will not hold up over the duration of the season. (One, two, three… DUH.)

Meanwhile, over in BK, the Nets are ripping the, well, nets: they are second in basketball with a 109.3 OffRtg and have the fourth-highest true shooting percentage in the league. Those numbers have benefited from double-digit shellackings to Detroit, the crumbling Thunder and at home against the Knicks. But let’s not anoint Brooklyn king of the Atlantic Division just yet: it was bum-rushed by Boston in its season debut, 121-105, and lost at home to Minnesota on Wednesday. Brooklyn’s most used lineup has been Deron Williams, Joe Johnson, Bojan Bogdanovic, Kevin Garnett and Brook Lopez — its only appeared in three of five games — and that unit has scored a puny 85.1 points per 100 possessions, according to NBA.com. Sub in Mason Plumlee for Lopez and the lineup hemorrhages 131.4 points per 100 possessions to opponents. No other Nets lineup has played a combined nine minutes; they have work to do, and much of their season depends on the health of its aging stars.

With that said, plenty of numbers have caught my eye since the season kicked off in late-October — both as potentially phony figures and outstanding developments from individual players and teams. Let’s take a look at some of these numbers while applying extreme caution and determine if they are for real or not. 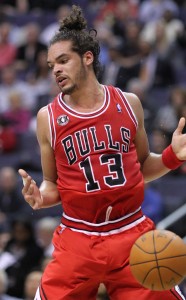 Joakim Noah missing games has led to the Bulls being dead last in defensive rebounding. But obviously the Bulls are a great rebounding team. Sometimes numbers DO lie. (Photo taken by Keith Allison)[/caption]

Let’s not over complicate this — we’ve seen the roster, we’ve watched the games. Let’s just rattle off some bangers.

3) The Jazz are closer to being the 22nd ranked defense (Miami) than they are being as bad as the Lakers.

4) Opponents are making 68.5 percent of their shots in the restricted area against the Lakers.

5) That means each FGA in the restricted area against the Lakers is worth 1.37 points for the other team.

6) Let’s compare that figure to the Pacers and the league-best 49.7 percent shooting they are allowing in the restricted area, courtesy of Roy Hibbert; this means a FGA in this zone against the Pacers is only worth .994 points.

7) Opponents are going to the foul line against the Lakers at the second-highest rate in the NBA, after nearly 43 percent of their FGA.

8) The only team worse in this category? The Denver Nuggets, who employ JaVale McGee.

9) Opponents have an eFG% of 56.4 against the Lakers, the worst-mark in the league.

10) The Lakers, as a team, have an eFG% of 46.1, which gives them the worst differential between opponent eFG% and team eFG% in the league, or in other words: EVERYBODY LOVES SHOOTING AGAINST THE LAKERS AND THE LAKERS CAN’T SHOOT, HA HA HA HA HA.

The Dallas Mavericks are the NBA’s most efficient offense:

Not much of a deviation from last season’s extravaganza in half-court offense efficiency, although the loss of Jose Calderon, one of the world’s greatest shooters, has mattered much less than expected. I’m planning on going into much more detail on this team in weeks to come, but through six games, the Mavericks starting lineup is arguably the best in basketball: scoring 110 points per 100 possessions with a true-shooting percentage of 57.6 (Top 5 rate) and an assist ratio of 20.8, which would make them the best passing team in basketball.

The Warriors and Rockets are murdering other teams:

Per 100 possessions, Golden State (16.5) and Houston (16.2) are outscoring their opponents by far and away the strongest margins. They are doing this by combining league-high true-shooting percentages with elite defense. The Warriors, who struggled under Mark Jackson to move the basketball or balance scoring responsibilities throughout their rotations, are flinging the ball around under coach Steve Kerr; the Warriors are fourth in the NBA in assist percentage and playing basketball on fast-forward with the Association’s top pace at 102.98.

The Rockets have certainly benefited from an easy schedule to being the season, perhaps playing the league’s four worst teams all in a row (Lakers, Jazz, Celtics, 76ers) before routing the Heat and a secondary version of the Spurs. They have taken care of business: in the 143 minutes James Harden and Dwight Howard have shared the floor, the Rockets are outscoring opponents by 33.4 points over 100 possessions. Those are Freddy Krueger numbers.

These teams square off Saturday in what can only be described as the greatest advertisement of NBA League Pass. After that, Houston plays Minnesota, Philadelphia again and what’s left of Oklahoma City before traveling to Memphis. The Rockets are a playoff lock — there’s just too much at the top for this team to be denied — but it would be wrong to overlook how a plushy early season schedule perhaps is elevating their record in the early-goings.

The Sacramento Kings have assembled the city of DeMarcus at the charity stripe:

The feel good story of the season already, the Kings are playing really great scheme basketball. Look at their roster — Is there any other way a team built around bulky, agile forwards DeMarcus Cousins and Rudy Gay should play besides drawing an immense amount of contact, attempting 39.8 FTA per game and scoring 31 percent of team points at the line? No, because this is brilliant.

What makes it better is that Cousins and company are doing what millionaire executives at all the major networks can’t do: Produce a hit comedy. The most fun thing in basketball is watching DeMarcus Cousins encourage his team on defense or from the bench; a close second is fighting back hearty chuckles when grown men are bouncing of Cousins’ flesh like little brothers on the playground. KINGS FOREVER AND EVER, AMEN.

The sentence “The Philadelphia 76ers and San Antonio Spurs are scoring baskets at the same rate” is the most small-sample size sentence of all-time; it’d be like Chuck Klosterman penning a “Why genocide is awesome for humanity” essay in 1939. So I’m not going to even entertain the possibility that the Spurs are in there right minds right now.

Look, San Antonio played three good teams (Mavs, Suns, Hawks) in single digit games, winning two of them, before resting significant players against the Rockets and being blown to smithereens. It’s been a tough four games, their pacing is off (just 95.68) and shooting has been below-average.

It’s just strange to see the Spurs with a 95.0 OffRtg, like catching one of those mind-melting pictures of sexy celebrities without any makeup, or taking a bite into a sandwich you just spent eleven minutes concocting only to find mold on the toast.

Portland has been an upper-echelon defense:

Look, the Trailblazers stunned everybody with their 54-win season last year, and they got there with an impressive offense and well-rehearsed conservative defense — an average unit, at best, but one that didn’t abandon the task altogether. Well in 2014-15, Portland is allowing just 95.8 points per 100 possessions, the fourth-best rate in basketball, and are doing by stifling opponent’s shooting figures to just 40.2 percent from the field and a league-best 23.4 percent on three-pointers.

A little too much too soon for a unit that was giving up 104.7 points per 100 possessions a season ago? Yeah, I think so too.

Portland’s best defensive performance was in many ways against Dallas on Thursday, holding Dallas to 18 points in a decisive third quarter, and chocking the life out of the Mavs in the fourth for a final score of 108-87. But that game was much more about the Trailblazers exploitation of the Mavericks defensive shortcomings — without Shawn Marion, they are no longer sure about who should guard Aldridge; Dirk and Chandler Parsons took a beating, and second-unit forwards like Al-Farouq Aminu and Jae Crowder are offensive unknowns over long stretches — as Portland’s 35-point third quarter destroyed Dallas.

In the first half, the Mavericks were 4 for 9 from the perimeter, as the tempo of the game was largely in their favor, and Dallas took a 54-50 lead into the half. As the tempo increased in the second half and more Portland shots began to fall, Dallas was sent out of whack, launching 14 long-range attempts and hitting just one 3PM. Like last season, the conservative defense Terry Stotts has brought to Portland blends well with their high-powered offense — if they are scoring it is difficult to keep up with them (see: 2013-14 playoffs). Portland’s two other wins this season came against a punchless Thunder and confused Cleveland, both teams that uncharacteristically scored in the 80s for the game, and at full gear never score that little. Portland surrendered 103 points to Sacramento on Halloween night; the Kings were a scorching 31 for 35 from the foul line.

Portland’s best defensive effort might have actually come in a 95-90 loss against Golden State: the Trailblazers outscored the Warriors 68-65 over the final three quarters, holding Golden State to 43.2 FG% in the second half and just two 3PM. Portland might be a good defensive team this season, and continuity shouldn’t be overlooked as a huge benefit for them, but this is not an upper crust defensive team in 2014-15.

There’s a few other stats that immediately jump out as “No freaking way this lasts” through the first eleven days of the season. The Bulls are currently the NBA’s worst defensive rebounding team, down from an above-average mark last season (75.4 percent) to 67.3 percent. The only players who have started each game for Chicago are Pau Gasol and Mike Dunleavy; having Joakim Noah, Jimmy Butler and Derrick Rose on the floor full-time will enhance those numbers. Oklahoma City’s injuries have damaged them in most areas, and immediately upon Kevin Durant and Russell Westbrook’s arrival figures like creating turnovers and DefRtg will reverse from the bottom to the top of the league. The Clippers are dead last in second chance points, an odd category to give away when you start DeAndre Jordan and Blake Griffin. We’re slowly, slowly learning about these 30 teams. The numbers tell parts of the story, but it is important to contrast these early-season figures with what we know from seasons past and what we are seeing on the floor.