Technically, Aaron Rodgers has a winning record against the Seattle Seahawks. That is if you count the one snap the then-rookie took against the would-be NFC Champs in 2005. The trend continued in Rodgers’ next game against Seattle (his first as a starter) in 2008 when the Pack skated to a 27-17 victory. Things got even better in 2009 when Rodgers, despite only completing 12 of 23 passes, was a part of a lopsided 48-10 win, in the only home game he’s started against Seattle in his career.

In 2010, the year the Packers won the Super Bowl under Rodgers, it would be completely acceptable to state that Rodgers held the definitive upper hand over the Hawks — even that he owned them. But 2010 wasn’t just the turn of a page for a middling Seahawks organization; it was an entirely different book. Think of your high school English teacher setting fire to Great Expectations and handing you something Stan Lee wrote. Forgive me fans of classic literature, but Seattle went from a mediocre snooze fest to barn-burner with a confusing, yet dazzling beginning, a shocking twist in the middle, and a resounding conclusion that looks primed for a sequel.

The spark notes version? Pete Carroll showed up, Marshawn Lynch ruined the defending champs, Russell Wilson and Golden Tate made a “catch” over M.D. Jennings, the Legion of Boom formed, a Super Bowl was won, and after fighting off one nasty hangover, the Seahawks appear to be primed to be the first team to repeat since the ‘04 Patriots. 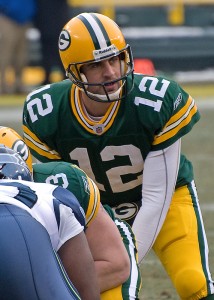 Where does this leave Rodgers and the Packers? Well they of course were the on the wrong end of what is affectionately dubbed the “Fail Mary” in most places outside the Pacific Northwest. They traveled to Seattle to open the 2014 NFL season and got smacked 36-16. They will try and avenge the loss this Sunday and secure their first trip back to the big dance since 2010. They better hope their signal caller is up to speed.

It’s been widely reported that Rodgers is dealing with a bum calf. It certainly didn’t look that way when No. 12 hung three touchdowns and 316 yards on Dallas last week. With a solid 92.6 QBR against Seattle in his four starts and one appearance, you’d think Rodgers still has the Seahawks’ number. In reality, Rodgers has never thrown for more than 250 yards against Seattle. It should come as no surprise that Rodgers’ lowest YPG against any team is the Seahawks with a mark of 171.4. His four passing touchdowns in four starts is tied for the lowest TD/G of any team he’s faced. Bottom line, Seattle’s vaunted secondary is more than capable of containing the wily gunslinger.

So how does Rodgers do it? How does he solve a defense that hasn’t allowed more than 20 points since November 16?They plan on being aggressive — more aggressive than they were in the opener, a game in which Rodgers avoided Richard Sherman entirely. The Packers’ leader failed to throw a single pass in the direction of the Seahawks’ heart and soul. That will likely change Sunday. Losing by twenty has a way of doing that.

Expect a lot of shotgun sets as the world witnessed last week when the Pack rolled over the Boys. This is by design; what better way to protect the “ailing” quarterback than putting him a few more yards away from the likes of Michael Bennett and Bruce Irvin.

But this also has the potential to be a double-edged sword for Mike McCarthy’s offense. It’s one thing to sellout to the pass when you’re facing a Dallas secondary that averaged 251.9 yards allowed per game. It’s another thing entirely when facing a Seattle defensive backfield that held opponents to a league-best 185.6 yards per game.

On the flip side, Seattle will have to leave a few men in the box to combat the likes of Marshawn Lynch-light, or as he’s better known, Eddie Lacy. Lacy was a nonfactor in week one, limited to just 34 yards on 12 carries. Still, if Lacy can find an inch, he’ll take a mile. Sustained success would open the play-action and subsequently the deep ball for Rodgers and will be essential if Green Bay wants to come away with a road win.

It boils down to this: Rodgers will need to be the quarterback that is the leading candidate among offensive players for League MVP — the player who had an 18:1 TD-INT ratio through the first seven games of the season and 20:4 in the final nine. All the training in the world with Hans and Franz can’t help Green Bay now. It falls squarely on the shoulders of the man who stepped boldly out of the shadow of Brett Favre for his first Lombardi trophy in 2010, but who has been desperate to duplicate that accomplishment in the years since, all the while allowing a potential dynasty in Seattle to emerge. Here’s Rodgers’ chance to take back the NFC.